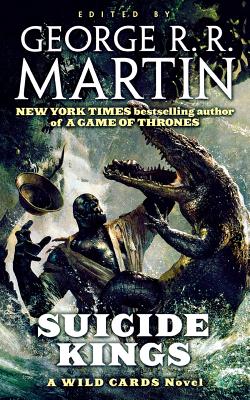 This is book number 20 in the Wild Cards series.

In 1946, an alien virus that rewrites human DNA was accidentally unleashed in the skies over New York City. It killed ninety percent of those it infected. Nine percent survived to mutate into tragically deformed creatures. And one percent gained superpowers. The Wild Cards shared-universe series, created and edited since 1987 by New York Times #1 bestseller George R. R. Martin ("The American Tolkien"—Time magazine) along with Melinda Snodgrass, is the tale of the history of the world since then—and of the heroes among the one percent.

Ranging from New York and New England to ravaged Africa and New Orleans, encompassing war, devastation, and stubborn hope, Suicide Kings advances the story of the Wild Cards, and their struggle to be fully human in a world that fears and mistrusts them.

“Delicious...Everything I'd hoped for in a new Wild Cards book. The character interactions and plot twists have exactly the complexity, surprise, and unsentimental realism I'd expect out of a George R. R. Martin project.” —Austin Grossman, author of Soon I Will Be Invincible, on Inside Straight