The Revenge of Power: How Autocrats Are Reinventing Politics for the 21st Century (Hardcover) 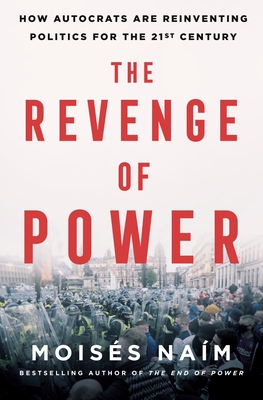 “An authoritative and intelligent portrait of the global spread of authoritarianism and its dangers...what sets [this] work apart from books like Timothy Snyder’s On Tyranny and Michiko Kakutani’s The Death of Truth is its unusually comprehensive armada of facts about the international drift over the past two decades toward authoritarian leaders, whether old-style dictators like Kim Jong Un or nominally elected presidents like Vladimir Putin.” —Kirkus


An urgent, thrilling, and original look at the future of democracy that illuminates one of the most important battles of our time: the future of freedom and how to contain and defeat the autocrats mushrooming around the world.

In his bestselling book The End of Power, Moisés Naím examined power-diluting forces. In The Revenge of Power, Naím turns to the trends, conditions, technologies and behaviors that are contributing to the concentration of power, and to the clash between those forces that weaken power and those that strengthen it. He concentrates on the three “P”s—populism, polarization, and post-truths. All of which are as old as time, but are combined by today’s autocrats to undermine democratic life in new and frightening ways. Power has not changed. But the way people go about gaining it and using it has been transformed.

The Revenge of Power is packed with alluring characters, riveting stories about power grabs and losses, and vivid examples of the tricks and tactics used by autocrats to counter the forces that are weakening their power. It connects the dots between global events and political tactics that, when taken together, show a profound and often stealthy transformation in power and politics worldwide. Using the best available data and insights taken from recent research in the social sciences, Naím reveals how, on close examination, the same set of strategies to consolidate power pop up again and again in places with vastly different political, economic, and social circumstances, and offers insights about what can be done to ensure that freedom and democracy prevail.

The outcomes of these battles for power will determine if our future will be more autocratic or more democratic. Naím addresses the questions at the heart of the matter: Why is power concentrating in some places while in others it is fragmenting and degrading? And the big question: What is the future of freedom?

MOISES NAIM is a scholar at the Carnegie Endowment for International Peace and an internationally syndicated columnist. He served as editor in chief of Foreign Policy, as Venezuela's trade minister, and as executive director of the World Bank. His books include The End of Power and Illicit, which was the basis of a National Geographic documentary.

"If you want to really understand the current global threat to democracy, you should read The Revenge of Power. Moisés Naím has written a masterpiece." —David Rubenstein, co-executive chairman of The Carlyle Group, chairman of The Kennedy Center and The Council on Foreign Relations

"In The Revenge of Power, Moisés Naím, one of the most acute observers of world politics, comprehensively catalogs the threats to democracy on the part of unaccountable dictators, populists, and companies in recent years, drawing insightful parallels across disparate domains. An important and timely work." —Francis Fukuyama, Stanford University professor and author of Identity

"Another original book by an original thinker, offering a unique global perspective on populism and power." —Anne Applebaum, Pulitzer-prize winning historian and staff writer, The Atlantic

"The Revenge of Power reminds me of why I consider Moisés Naím one of the world’s most exciting and original political thinkers. This absorbing book explores the often contradictory trends that are reshaping political power, and explains that our future depends on how they get resolved. Essential reading." —Madeleine Albright, former Secretary of State

"How did the ‘end of history’ turn into the renaissance of autocracy? Moisés Naím brings his incisive analysis and global perspective to the most disturbing question of the 21st century, showing how populism, polarization and ‘post-truth’ politics have powered the rise of leaders from Berlusconi to Bolsonaro, Orban to Erdogan, Duterte to Donald Trump. Anyone who cares about the future of truth and democracy should read this book." —Alan Murray, CEO of FORTUNE

"An unusually smart, insightful, and elegantly written book about why authoritarians and autocrats have risen to power around the globe—and how we can defend democracy in our own backyards. No one understands power better than Moisés Naím, and I was hooked from the third sentence.” —Adam Grant, #1 New York Times bestselling author of Think Again and host of the TED podcast WorkLife

“Naím delivers a cogent and accessible overview of the new authoritarianism. Readers will agree that the matter is of urgent concern.” —Publishers Weekly

“An authoritative and intelligent portrait of the global spread of authoritarianism and its dangers...what sets [this] work apart from books like Timothy Snyder’s On Tyranny and Michiko Kakutani’s The Death of Truth is its unusually comprehensive armada of facts about the international drift over the past two decades toward authoritarian leaders, whether old-style dictators like Kim Jong Un or nominally elected presidents like Vladimir Putin.” —Kirkus

"The Revenge of Power is an unnerving read...the book serves as a forceful wake-up call to anyone who thinks a dictatorship can't happen here." —The Progressive

“The Revenge of Power is wide-ranging in scope, providing insights into our current crisis without trying to ferret out a single cause of democratic decline.…filled with illustrative histories of various autocrats and the ways they honed their craft in their rise to power.” —Washington Post

“A foreign-policy maven’s account of how recent demagogues have come to power and used the tools of our time—social media, television, the society of spectacle—to promote one-man rule and the suppression of dissent.” —Adam Gopnik, The New Yorker

Praise for The End of Power:
"The End of Power makes a truly important contribution, persuasively portraying a compelling dynamic of change cutting across multiple game-boards of the global power matrix." —Washington Post

"This fascinating book...should provoke a debate about how to govern the world when more and more people are in charge." —Foreign Affairs