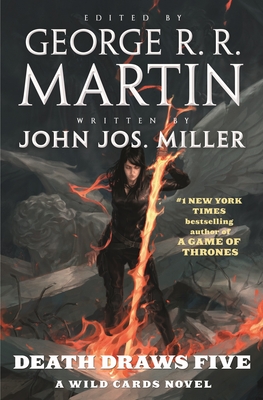 This is book number 17 in the Wild Cards series.

Edited by bestselling author George R. R. Martin, in the next Wild Cards adventure we follow John Fortune, son of two of the most powerful and popular Aces the world has ever seen.

In Death Draws Five, John Fortune's card has finally turned. He's an Ace! And proud of it . . . except that his new powers put him on a collision course with enemies he never knew he had. Is he the new messiah? Or the Anti-Christ? Or is he just a kid who's in over his head and about to drown?

It's really quite simple. Mr. Nobody wants to do his job. The Midnight Angel wants to serve her Lord. Billy Ray, dying from boredom, wants some action. John Nighthawk wants to uncover the awful secret behind his mysterious power. Fortunato wants to rescue his son from the clutches of a cryptic Vatican office. John Fortune just wants to catch Siegfried and Ralph's famous Vegas review. The problem is that all roads, whether they start in Turin, Italy, Las Vegas, Hokkaido, Japan, Jokertown, Snake Hill, the Short Cut, or Yazoo City, Mississippi, lead to Leo Barnett's Peaceable Kingdom, where the difference between the Apocalypse and Peace on Earth is as thin as a razor's edge and where Death himself awaits the final, terrible turn of the card.

JOHN JOS. MILLER is best known for his involvement as a contributor to the Wild Cards universe. He also wrote GURPS Wild Cards, a supplement for the GURPS role-playing system.