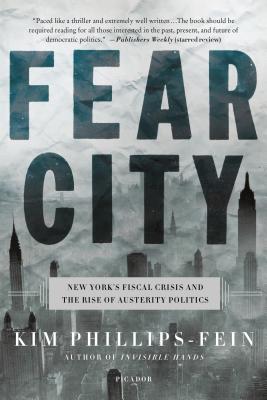 An epic, riveting history of New York City on the edge of disaster—and an anatomy of the austerity politics that continue to shape the world today

When the news broke in 1975 that New York City was on the brink of fiscal collapse, few believed it was possible. How could the country’s largest metropolis fail? How could the capital of the financial world go bankrupt? Yet the city was indeed billions of dollars in the red, with no way to pay back its debts. Bankers and politicians alike seized upon the situation as evidence that social liberalism, which New York famously exemplified, was unworkable. The city had to slash services, freeze wages, and fire thousands of workers, they insisted, or financial apocalypse would ensue.

In this vivid account, historian Kim Phillips-Fein tells the remarkable story of the crisis that engulfed the city. With unions and ordinary citizens refusing to accept retrenchment, the budget crunch became a struggle over the soul of New York, pitting fundamentally opposing visions of the city against each other. Drawing on never-before-used archival sources and interviews with key players in the crisis, Fear City shows how the brush with bankruptcy permanently transformed New York—and reshaped ideas about government across America.

At once a sweeping history of some of the most tumultuous times in New York's past, a gripping narrative of last-minute machinations and backroom deals, and an origin story of the politics of austerity, Fear City is essential reading for anyone seeking to understand the resurgent fiscal conservatism of today.

Fear City is one of Publishers Weekly's Top 10 Best Books of 2017, and a finalist for the Pulitzer Prize for History

Kim Phillips-Fein is a professor of history at New York University and the author of Invisible Hands: The Businessmen's Crusade Against the New Deal. A recipient of grants from the New York Public Library's Cullman Center and the National Endowment for the Humanities, she has written for The Nation, Dissent, The Baffler, The Atlantic, and The New York Times, among other publications.

“A powerful and involving work of narrative history... You come away from Fear City with a clear sense of what was lost as New York left behind one set of priorities and embraced another.... This is a book that deserves an audience beyond New York City history buffs, and all the more so because of its relevance to our political moment. The young Donald Trump makes a brief cameo appearance as an icon of the new New York, a real estate mogul who leveraged his father’s connections and the city’s desperation into massive tax breaks, starving the city of badly needed revenues for education and other basic municipal functions as he developed properties for the rich.
—Jonathan Mahler, The New York Times Book Review

“Paced like a thriller and extremely well written... Phillips-Fein narrates with almost cinematic flair, and by the time the credits roll, the significance of her accomplishment becomes clear. The book should be required reading for all those interested in the past, present, and future of democratic politics.”
—Publishers Weekly (starred review)

“Fear City is the best account of the New York City fiscal crisis of the 1970s and, more than that, an indispensable contribution to understanding the rise of austerity economics and the long decline of the public sector. This is a history with huge implications for the remaking of American politics and economics in our time.”
—Thomas J. Sugrue, author of Origins of the Urban Crisis

“The remaking of New York City under cover of crisis was a prelude to what would become a global economic tidal wave. In zeroing in on this little-understood chapter of urban history, Fear City helps sheds much-needed light on a range of contemporary crises, from the starvation of public services amidst enormous private wealth to the rise of Donald Trump. Kim Phillips-Fein is a historian of the first order.”
—Naomi Klein, author of The Shock Doctrine and This Changes Everything

“Fair, thorough, incisive, and stylish, this is the best book to read not just on New York’s fiscal crisis of the 1970s, but about how bankers became our unacknowledged legislators ever since.”
—Rick Perlstein, author of Nixonland and The Invisible Bridge

“Before there was Reagan, before there was Thatcher, there was New York City’s fiscal crisis. Here we can see the blueprint for what has since been done to the entire world. This is the story of how the gears were shifted and the age of liberalism put into reverse, told with all the engrossing details, all the forgotten characters, and a memorable style.”
—Thomas Frank, author of What’s the Matter with Kansas? and Listen, Liberal

“A tour de force. If you want to find the roots of modern conservatism, don’t look in Louisiana, Arizona, or rural Wisconsin. Look in New York, and read Kim Phillips-Fein’s superb Fear City. New York in the 1970s, as Phillips-Fein compellingly shows, was the first sustained victory in the New Right’s long war against the New Deal. Extremely well written and impressively researched, Fear City is essential reading to understand how finance capital, real estate speculation, austerity budgeting, and punitive policing first came together to create the toxic politics of today.”
—Greg Grandin, author of Fordlandia and Kissinger’s Shadow

“Fear City provides the definitive account of the moment when New York City liberalism ran out of momentum and money, and the conservative reaction that has culminated in Donald Trump began. Phillips-Fein chronicles not only the tense dance with municipal bankruptcy but the largely forgotten efforts by ordinary New Yorkers to stop the legal coup by local and national elites. Lucid, elegantly written, full of new information, it belongs on the shelf of key books about the city, alongside The Power Broker, Gotham, and their like.”
—Joshua B. Freeman, author of American Empire and Working-Class New York

“This revealing narrative of New York’s transformation from working-class social democracy to the glittering home of fancy finance reminds us that behind the mask of austerity there always lurks a bitter politics of class.”
—James K. Galbraith, author of The Predator State and Welcome to the Poisoned Chalice

“The story of New York’s financial crisis in the seventies is really a story about the role of cities in America today. New Yorkers pride themselves on being cosmopolitan, on welcoming immigrants, on being willing to spend money on education, healthcare, and infrastructure. Kim Philips-Fein convincingly explains why that caused problems for the city in the past and why now we need New York values more than ever."
—Joseph E. Stiglitz, author of Globalization and Its Discontents and The Price of Inequality