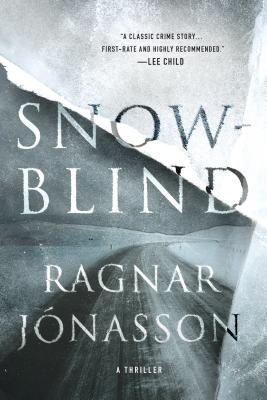 This is book number 1 in the The Dark Iceland Series series.

Taut and terrifying, Snowblind is a startling debut from Ragnar Jonasson, an extraordinary new talent.

Where: An isolated fishing village in the fjords of northern Iceland, where no one locks their doors.

Who: Ari Thór is a rookie policeman on his first posting, far from his girlfriend in Reykjavík.

What: A young woman is found lying half naked in the snow, bleeding and unconscious, and a highly esteemed elderly writer falls to his death. Ari is dragged straight into the heart of a community where he can trust no one, and secrets and lies are a way of life.

*BONUS CONTENT: This edition of Snowblind includes a new introduction from the author and a discussion guide

RAGNAR JONASSON is an internationally number-one bestselling author who has sold more than two million books in thirty-two countries worldwide. He was born in Reykjavik, Iceland, where he also works as an investment banker and teaches copyright law at Reykjavik University. He has previously worked on radio and television, including as a TV news reporter for the Icelandic National Broadcasting Service, and, from the age of seventeen, has translated fourteen of Agatha Christie's novels. His critically acclaimed international bestseller The Darkness is soon to be a major TV series.

Ragnar Jonasson hailed as one of "the heirs to the Agatha Christie crown" by The Daily Telegraph (UK).

"Obviously inspired by Agatha Christie and Ellery Queen, Snowblind is old school despite its exotic setting.... With his twisty plotting, isolated location and intriguing characters, Jonasson's series is one to watch. Grade: A" —Cleveland.com

"A modern Icelandic take on an Agatha Christie-style mystery, as twisty as any slalom..." —Ian Rankin

"Jonasson skillfully alternates points of view and shifts of time...The action builds to a shattering climax."—Publishers Weekly (boxed and starred)

"This classically crafted whodunit holds up nicely, but Jonasson’s true gift is for describing the daunting beauty of the fierce setting, lashed by blinding snowstorms that smother the village in “a thick, white darkness” that is strangely comforting."—New York Times Book Review

“A chiller of a thriller whose style and pace are influence by Jonasson’s admiration for Agatha Christie. It’s good enough to share shelf space with the works of Yrsa Sigurdardottir and Arnaldur Indridason, Iceland’s crime novel royalty.”—The Washington Post

"A real find. I loved it. The turns of the plot are clever and unexpected, and Ari is a wonderful character to spend time with."—Mystery Scene

“In this debut novel, Jonasson has taken the locked-room mystery and transformed it into a dark tale of isolation and intrigue that will keep readers guessing until the final page.”—Library Journal Xpress

“Jonasson spins an involving tale of small-town police work that vividly captures the snowy setting that so affects the rookie cop. Iceland noir at its moodiest”—Booklist

"Snowblind aptly depicts Ari's tension and terror as he grows ever more isolated. Perfectly capturing the pressures of rural life and the freezing, deadly Icelandic winter, Snowblind will keep readers on the edge of their seats--preferably snuggled beneath a warm blanket."—Shelf Awareness

"If a Golden Age crime novel was to emerge from a literary deep freeze then you’d hope it would read like this." —Craig Robertson

"Seductive … an old-fashioned murder mystery with a strong central character and the fascinating background of a small Icelandic town cut off by snow. Ragnar does claustrophobia beautifully." —Ann Cleeves

“Snowblind has the classic red herrings, plot twists and surprises that characterize the best of Christie’s work. Jonasson’s latest is nicely done and simply begs for a sequel.”—BookPage

"As dazzling a novel as its title implies and the wonderful Ari Thór is a welcome addition to the pantheon of Scandinavian detectives. I can’t wait until the sequel!" —William Ryan

"[Snowblind] leaves you wishing for and wanting more of its quirky, memorable characters and haunting backdrop."—Bookreporter

"What sets Snowblind apart is the deep melancholy pervading the characters. Most of them, including Ari, have suffered a tragic loss. That's bad for them, but along with the 24-hour darkness closing in, it makes for the best sort of gloomy storytelling."—Chicago Tribune

"A classic whodunit with a vividly drawn protagonist and an intriguing, claustrophobic setting, Snowblind dazzles like sunlight on snow, chills like ice and confirms the growing influence of Scandinavian crime fiction."—Richmond Times-Dispatch

"A satisfying mystery where all the pieces, in the end, fall together."—Dallas News

"One of the 10 best works of fiction you’ll read this year."—The Durango Telegraph

"Jonasson has no qualms about detouring the narrative to detail a supporting player's unhappy childhood or long-running marital woes. Perhaps he's trying to capture that small-town aura of everyone knowing everyone else's business. Whatever his motivation, he definitely shows a knack for the whodunit business."—Minneapolis Star Tribune

"Jonasson has produced a tense and convincing thriller; he is a welcome addition to the roster of Scandi authors, and I really look forward to his next offering." —Mystery People

"Snowblind is morally more equivocal than most traditional whodunnits, and it offers alluring glimpses of darker, and infinitely more threatening horizons." —The Independent (UK)

"Snowblind is a dark, claustrophobic read, and Jónasson evokes perfectly the 24-hour darkness, the biting cold, the relentless snow and fear of a killer on the loose in a village suddenly cut off by an avalanche. His crisp, bleak prose is an exemplary lesson in how to create atmosphere without producing over-inflated books that would cause their own avalanche if dropped." —Crime Review

"Ragnar Jonasson is a new name in the crime writing genre and I urge anyone who is a fan of Nordic crime noir to rush out and get yourself a copy of Snowblind this you will want to add to your collection. It is really that good." —The Last Word-Book Review

"Jonasson's realistic but dramatic storytelling, sleight-of-hand shifting of point of view, and underreported attention to the imminent national crisis make Snowblind a riveting read. A worthwhile contribute to the growing and increasingly popular Scandinavian noir tradition."—Reviewing the Evidence

"If you are a fan of nordic noir that is an excellent example of the crime fiction genre, look no further. This series needs to go on your must read list."—The Suspense is Thrilling Me

"The plot is built cleverly as there are only a few people who could have perpetrated the crimes and it all comes to a not obvious conclusion in this well written and engaging novel. I think it does make it more sinister as you never really know if he is safe walking around in the deep snow and perpetual dark. Who can he trust?" —lacremedelacrime

"If Arnaldur is the King and Yrsa the Queen of Icelandic crime fiction, then Ragnar is surely the Crown Prince … more please!" —EuroCrime

"The descriptive prose Jonasson uses is gorgeous and even the actual crime scenes themselves are oddly beautiful sounding. There is a mature elegance to his writing style that really captivates the reader."—Novelgossip

"[Ari Thor's] investigation...uncovers many old village secrets that had simmered for a long time before they boiled over into murder. And, though he makes mistakes, Ari Thor has good investigative instincts and succeeds in proving himself."—Book Loons

"A classic whodunit set in a stark place with a twisted ending."—AuntieMWrites