In Sight of Stars: A Novel (Hardcover) 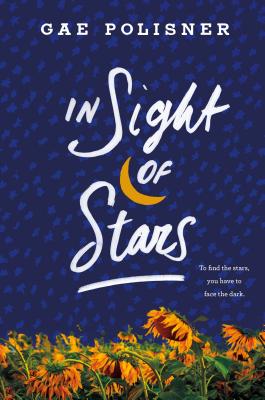 By Gae Polisner
Unavailable, our apologies.
Out of Print

"An achingly fierce exploration of the way the world wounds us and heals us. If you love exquisitely written coming-of-age stories that will leave you breathless, In Sight of Stars is for you." - Jeff Zentner, William C. Morris award-winning author of The Serpent King and Goodbye Days

Seventeen-year-old Klee’s father was the center of his life. He introduced Klee to the great museums of New York City and the important artists on their walls, he told him stories made of myths and magic. Until his death.

Now, forced to live in the suburbs with his mom, Klee can’t help but feel he’s lost all the identifying parts of himself—his beloved father, weekly trips to the MoMA, and the thrumming energy of New York City. That is until he meets wild and free Sarah in art class, with her quick smiles and jokes about his “brooding.” Suddenly it seems as if she’s the only thing that makes him happy. But when an act of betrayal sends him reeling, Klee lands in what is bitingly referred to as the “Ape Can,” a psychiatric hospital for teens in Northhollow.

While there, he undergoes intensive therapy and goes back over the pieces of his life to find out what was real, what wasn’t, and whether he can stand on his own feet again. Told in alternating timelines, leading up to the event that gets him committed and working towards getting back out, Gae Polisner’s In Sight of Stars is a gorgeous novel told in minimalist strokes to maximal effect, about what makes us fall apart and how we can put ourselves back together again.

GAE POLISNER is the award-winning author of In Sight of Stars, The Memory of Things, The Summer of Letting Go, The Pull of Gravity, and Jack Kerouac is Dead to Me. She lives on Long Island with her husband, two sons, and a suspiciously-fictional looking dog. When Gae isn't writing, you can find her in a pool or the open waters off Long Island. She's still hoping that one day her wetsuit will turn her into a superhero.

"In Sight of Stars deals with mental health, Vincent Van Gogh, family and recovery; all told in some of the most beautiful prose you will probably ever read. As far as I'm concerned, [this novel] is the equivalent to “Starry Night Over the Rhone,” making Gae Polisner the Vincent Van Gogh of young adult fiction." - Teen Reads

"A moving YA read about grief, mental health, and healing." - HelloGiggles

"Gae Polisner’s latest release is nothing short of extraordinary. As I like to say, this book is the lovechild of Stephen Chbosky’s The Perks of Being a Wallflower and Ned Vizzini’s It’s Kind of a Funny Story... One of the most compelling and important books on the shelves today, giving teens an outlet to feel heard and understood."- Germ Magazine

"In the vein of Ned Vizzini's It's Kind of a Funny Story, Polisner's short novel destigmatizes mental illness, emphasizing that everyone needs a little help sometimes. Readers will laugh, cry, and ache alongside Klee as they follow his recover. In a sea of recent contemporary novels about teens with mental illnesses, this one stands out for its strong writing, likable protagonist, and overwhelmingly positive messages." - School Library Journal

"An unapologetic and wry story about a teen finding his way out of a personal crisis." - Kirkus Reviews

"Readers will be able to see more dimensions to his parents than Klee himself sees as he recounts his memories; by the end, characters are fully realized in all their damaged complexity. Readers traversing their own real and metaphorical losses, particularly as they learn to see their parents and themselves as full individuals, will find companionship as they share Klee’s journey toward acceptance of who he is." - The Bulletin of the Center for Children's Books

“This book is an absolute must-read and the best contemporary novel I’ve read since J.C. Geiger’s Wildman.” – YA Books Central

"An achingly fierce exploration of the way the world wounds us and heals us. If you love exquisitely written coming-of-age stories that will leave you breathless, In Sight of Stars is for you." - Jeff Zentner, William C. Morris award-winning author of The Serpent King and Goodbye Days

"What a book. So human and kind and forgiving and real." - Geoff Herbach, award-winning author of Stupid Fast and Hooper