The Trip to Echo Spring: On Writers and Drinking (Hardcover) 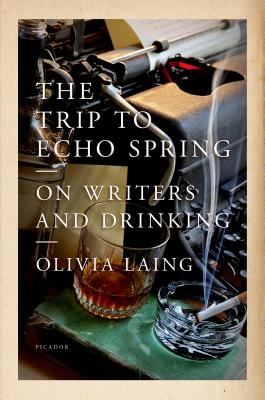 By Olivia Laing
Unavailable, our apologies.
Out of Print

WHY IS IT THAT SOME OF THE GREATEST WORKS OF LITERATURE HAVE BEEN PRODUCED BY WRITERS IN THE GRIP OF ALCOHOLISM, AN ADDICTION THAT COST THEM PERSONAL HAPPINESS AND CAUSED HARM TO THOSE WHO LOVED THEM?

All six of these writers were alcoholics, and the subject of drinking surfaces in some of their finest work, from Cat on a Hot Tin Roof to A Moveable Feast. Often, they did their drinking together: Hemingway and Fitzgerald ricocheting through the cafés of Paris in the 1920s; Carver and Cheever speeding to the liquor store in Iowa in the icy winter of 1973.

Olivia Laing grew up in an alcoholic family herself. One spring, wanting to make sense of this ferocious, entangling disease, she took a journey across America that plunged her into the heart of these overlapping lives. As she travels from Cheever's New York to Williams's New Orleans, and from Hemingway's Key West to Carver's Port Angeles, she pieces together a topographical map of alcoholism, from the horrors of addiction to the miraculous possibilities of recovery.

Beautiful, captivating, and original, The Trip to Echo Spring strips away the myth of the alcoholic writer to reveal the terrible price creativity can exert.

Olivia Laing is a writer and critic. Her first book, To the River, was published by Canongate to wide acclaim and shortlisted for the Ondaatje Prize and the Dolman Travel Book of the Year. She has been the deputy books editor of the Observer, and writes for The Guardian, New Statesman, and The Times Literary Supplement, among other publications. She is a MacDowell Fellow, and has received grants from the Arts Council and the Authors’ Foundation. She lives in Cambridge, England.

“Rather than lightheartedly skipping stones along the surface of the queasily common connection between great authors and their drinking habits, Laing dives deep, plummeting into some of her subjects' darkest impulses....Impecabbly researched...exposing details that, while mostly sad, are almost sickeningly absorbing. The result is a multilayered biography that reads quick as fiction, and is teeming with fantastically melancholy details of the writers we thought we knew.” —Lauren Viera, The Chicago Tribune

“Most beguiling and incisive.” —The New York Times

“[A] charming and gusto-driven look at the alcoholic insanity of six famous writers…There is much to learn from Laing's supple scholarship--and much to enjoy, too.” —Lawrence Osborne, The New York Times Book Review

“Her exquisite readings of Hemingway's short story 'The Snows of Kilimanjaro' and Cheever's short story 'The Swimmer' will make you want to reread those anthologized chestnuts and delve into Carver's and Berryman's perhaps less familiar poetry....Laing, wisely, doesn't reach any one-size-fits-all conclusions about the bond between the pen and the bottle. Some of her writers drink, it seems, to quell panic and self-disgust; others as a stimulant; others for who-knows-what reason.” —Maureen Corrigan, NPR's Fresh Air

“The Trip to Echo Spring is a rewarding book to wend your way through even if the writers Laing focuses on Cheever, Fitzgerald, Hemingway, Tennessee Williams, Raymond Carver and the American poet John Berryman--aren't among your particular favorites. Laing writes a fluid, fertile nonfiction... Although Laing isn't an alcoholic herself, she alludes to several adult relationships blighted by the disease, and her second-hand understanding of it is manifestly detailed and deep...” —Laura Miller, Salon

“Laing's writing is beautiful, her insights frequently surprising and powerful. The book's greatest virtue, however, is that it positively swells with empathy.” —Rosie Schaap, Slate

“Olivia Laing's book is an exploration of alcoholism in six 20th-century American writers...that dazzles in both the scope of its ambition and the depths it reaches in analyzing its subjects. Laing, through the lens of extensive research both into the writer's biographies and into literature about alcoholism as a disease, paints these writers with a brush that renders them in new light....While there may be more uplifting books about writing and writers, few present the reader with such sobering realities about the downside to all those romantic, drunken nights in Paris or Key West.” —Interview

“Olivia Laing emerges as a kind of British Susan Orlean, combining nonfiction narrative, travel writing, literary criticism and a touch of memoir in a personable style....Her descriptions of the landscape she sees, the conversations she overhears and the people she runs into are sparkling....Without building to a specific point or climax, Laing keeps you on board through her journey...” —Newsday

“The Trip to Echo Spring...contains astute observations about addiction....Laing provides a remarkably cogent explanation of alcohol's effects on the brain and emotions.” —Tampa Bay Times

“The Trip to Echo Spring, Olivia Laing's remarkable book about six alcoholic American writers, reminds me of the overhead projections we watched in classrooms before PowerPoint came along, in which several transparent sheets were artfully lined up atop each other to produce a complex document....I've read many words about the alcoholism of literary writers, and many more words about the 12 Step model of addiction and recovery. But until "Echo Spring," I'd never read a writer who bridged both worlds with such intelligence, grace and thoughtfulness.” —Milwaukee Journal-Sentinel

“A funny, tragic, and insightful journey for anyone who has read F. Scott Fitzgerald, Ernest Hemingway, Tennessee Williams, or John Berryman; prepare to be smitten with this fresh offering. Those unfamiliar with these writers will want to read their works.” —Library Journal (starred review)

“Laing, with shimmering detail and arresting insights, presents a beautifully elucidating and moving group portrait of writers enslaved by drink and redeemed by 'the capacity of literature to somehow...make one feel less flinchingly alone.'” —Booklist (starred review)

“The tortured relationship between literary lions and their liquor illuminates the obscure terrain of psychology and art in this searching biographical medidation....Laing's astute analysis of the pervasive presence and meaning of drink in the writers' texts, and its reflection of the writers' struggle to shape--and escape--reality...A fine study of human frailty through the eyes of its most perceptive victims” —Publishers Weekly (starred)

“I'm sorry I've finished this wonderful book because I feel I've been talking to a wise friend. I've been trying to work out exactly how Olivia Laing drew me in, because I hardly drink myself and have no particular attachment to the group of writers whose trials she describes. I think the tone is beautifully modulated, knowledgeable yet intimate, and she can evoke a state of mind as gracefully as she evokes a landscape....I think this is a book for all writers or would-be writers, whether succeeding or failing, whether standing on their feet or flat on the pavement....It's one of the best books I've read about the creative uses of adversity: frightening but perversely inspiring.” —Hilary Mantel, Booker Prize–winning author of Wolf Hall and Bring Up the Bodies

“I loved The Trip to Echo Spring. It's a beautiful book that has stayed with me in a profound way.” —Nick Cave

“The Trip to Echo Spring...thank God, never reductively answers the question [why writers drink] but thoughtfully explores it through an examination of the lives and careers of 'Tennessee Williams, John Cheever and Raymond Carver among others.” —Jay McInerney

“A beguiling, beautifully written journey in search of six famous literary drunks. What gives her book its brilliance and originality...[is] the quality of its writing.” —The Sunday Times (London)

“The beauty of Laing's book lies not just in the poetry of her prose, the rich array of images, and literary allusions to her chosen subjects evoked during her transcontinental ghost-hunt, but intriguing links she makes to a wider literary landscape.” —The Independent (London)

“Laing's analysis of the complex addiction is consistently shrewd. But what makes The Trip to Echo Spring truly worthwhile is that she, like those she writes about, is a terrific writer.” —The Times (London)

“This book is a triumphant exercise in creative reading in which diary entries, letters, poems, stories and plays are woven together to explore deep, interconnected themes of dependence, denial and self-destructiveness. It is a testimony to this book's compelling power that having finished it, I immediately wanted to read it again.” —Scotland on Sunday

“Like a night out with an academically-inclined Elizabeth Taylor or Ava Gardner. Sodden, surprising, riotous, and crazily up and down. Welsh puritan that I am, I loved it.” —Daily Mail

“The book's subtitle, Why Writers Drink, undersells her achievement. …[Laing has produced] a nuanced portrait--via biography, memoir, analysis--of the urge of the hyperarticulate to get raving drunk.” —New Statesman (London)

“It's deliciously evocative, Laing's melancholic and lyrical style conjuring the location, before effortlessly segueing into medical facts about alcoholism, the effects on the lives of each writer, and well-chosen passages from their work. This is a highly accomplished book, and highly recommended.” —List (London)