Trident K9 Warriors: My Tale from the Training Ground to the Battlefield with Elite Navy SEAL Canines (Hardcover) 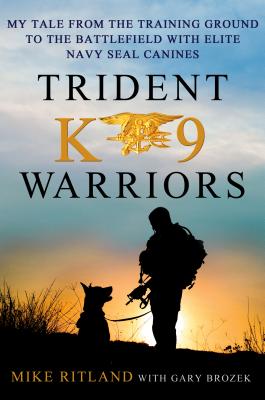 By Mike Ritland, Gary Brozek
Unavailable, our apologies.
Out of Print

The New York Times bestseller featured on 60 Minutes, this is the first book to take readers inside the world of elite Navy SEAL dogs.

As a Navy SEAL during a combat deployment in Iraq, Mike Ritland saw a military working dog in action and instantly knew he'd found his true calling. Ritland started his own company training and supplying dogs for the SEAL teams, U.S. Government, and Department of Defense. He knew that fewer than 1 percent of all working dogs had what it takes to contribute to the success of our nation's elite combat units, and began searching the globe for animals who fit this specific profile. These specialized canines had to pass rigorous selection tests before their serious training could begin.

The results were a revelation: highly trained working dogs capable of handling both detection and apprehension work in the most extreme environments and the tensest of battlefield conditions. Though fiercely aggressive and athletic, these dogs develop a close bond with the handlers they work side by side with and the other team members. Truly integrating themselves into their units, these K9 warriors are much like their human counterparts—unwavering in their devotion to duty, strong enough and tough enough to take it to the enemy through pain, injury, or fear.

For the first time ever, the New York Times bestseller Trident K9 Warriors gives readers an inside look at these elite canines—who they are, how they are trained, and the extreme missions they undertake saving countless lives, asking for little in the way of reward. From detecting explosives to eliminating the bad guys, these powerful dogs are also some of the smartest and most highly skilled working animals on the planet.

MIKE RITLAND joined the Navy in 1996 and graduated with BUD/S class 215. After years as a member of SEAL Team 3, he became a BUD/S instructor and then started his own company to train dogs for the SEAL teams. Today he continues to supply working and protection dogs to a host of clients, including the U.S. government and Department of Defense. He also started the Warrior Dog Foundation to help retired Special Operations dogs live long and happy lives after their service. Ritland is also the author of a book on dog training, Team Dog: How to Train Your Dog the Navy SEAL Way.

GARY BROZEK has collaborated on more than twenty books, five of which have gone on to become New York Times bestsellers, including Trident K9 Warriors. He lives in Evergreen, CO.

“After a stellar career in the Teams, Mike Ritland has gone on to train working K9's for some of the most elite units in the U.S. Special Operations community. These dogs are integrated into Special Operations at all levels of mission planning. They HALO parachute from high altitude, chase enemy squirters, and detect explosive booby traps, to name just a few tasks. If you want to learn about these amazing animals, the sacrifices they've made, and their effectiveness in combat, then read Navy SEAL K9 Warriors.” —Brandon Webb, Former Navy SEAL, New York Times bestselling author of The Red Circle, and Editor-in-Chief SOFREP.com

“[Ritland] and co-writer Gary Brozek tell a rattling good story, detailing the checkered history of dogs in combat and the contributions their making today.” —Cesar's Way

“The accounts of fieldwork and battles are specific and extraordinary, making this a pick for any military collection.” —Internet Bookwatch