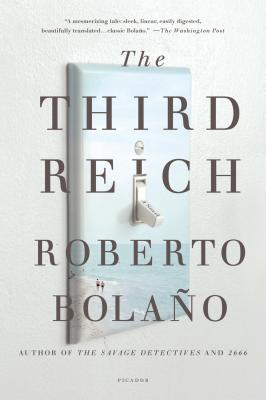 By Roberto Bolaño, Natasha Wimmer (Translated by)
$20.00
On Our Shelves

A beautiful seaside town sits in an idyllic landscape. Like anything that sits in the sun for too long, it begins to rot, in spectacular fashion.

On vacation with his girlfriend, Ingeborg, the German war-game champion Udo Berger returns to a small town on the Costa Brava where he spent his summers as a child. There, they meet another vacationing German couple, who introduce them to the darker side of the resort town's life. Soon Udo is enmeshed in a round of the Third Reich, his favorite World War II strategy game, with a shadowy local called El Quemado. As the game draws to its conclusion, Udo discovers that the outcome may be all too real.

Written in 1989, The Third Reich is Roberto Bolaño's stunning exploration of memory and violence---and a rare glimpse at a world-class writer coming into his own.

Roberto Bolaño was born in Santiago, Chile, in 1953. He grew up in Chile and Mexico City, where he was a founder of the Infrarealist poetry movement. His first full-length novel, The Savage Detectives, received the Herralde Prize and the Rómulo Gallegos Prize when it appeared in 1998. Roberto Bolaño died in Blanes, Spain, at the age of fifty.

Natasha Wimmer is a translator who has worked on Roberto Bolaño’s 2666, for which she was awarded the PEN Translation prize in 2009, and The Savage Detectives. She lives in New York.

“A beguiling introduction to Bolaño…The Third Reich is giddily funny, but it is also prickly and bizarre enough to count among Bolaño's first-rate efforts.” —The Economist

“A perfect novel…Compassionate, disturbing, and deeply felt, it's as much of a gift as anything the late author has given us.” —NPR

“Think Kafka at a beach resort...For those who like their literature to make them look with fear and suspicion at even the most mundane events, The Third Reich is calling.” —The Cleveland Plain Dealer

“Bolaño is a master of atmosphere...in the tradition of Georges Simenon's gloomy romans durs...or the tightly controlled hallucinations of Alain Robbe-Grillet.” —The Wall Street Journal

“A brilliant first novel…all the more remarkable for its prescience.” —The New Republic