The Big Truck That Went By: How the World Came to Save Haiti and Left Behind a Disaster (Paperback) 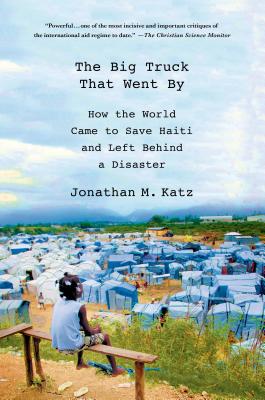 On January 12, 2010, the deadliest earthquake in the history of the Western Hemisphere struck the nation least prepared to handle it. Jonathan M. Katz, the only full-time American news correspondent in Haiti, was inside his house when it buckled along with hundreds of thousands of others. In this visceral, authoritative first-hand account, Katz chronicles the terror of that day, the devastation visited on ordinary Haitians, and how the world reacted to a nation in need.

More than half of American adults gave money for Haiti, part of a monumental response totaling $16.3 billion in pledges. But three years later the relief effort has foundered. It's most basic promises-to build safer housing for the homeless, alleviate severe poverty, and strengthen Haiti to face future disasters-remain unfulfilled.

The Big Truck That Went By presents a sharp critique of international aid that defies today's conventional wisdom; that the way wealthy countries give aid makes poor countries seem irredeemably hopeless, while trapping millions in cycles of privation and catastrophe. Katz follows the money to uncover startling truths about how good intentions go wrong, and what can be done to make aid "smarter."
With coverage of Bill Clinton, who came to help lead the reconstruction; movie-star aid worker Sean Penn; Wyclef Jean; Haiti's leaders and people alike, Katz weaves a complex, darkly funny, and unexpected portrait of one of the world's most fascinating countries. The Big Truck That Went By is not only a definitive account of Haiti's earthquake, but of the world we live in today.

Jonathan Myerson Katz received the James Foley/Medill Medal for Courage in Journalism for reporting from Haiti. His first book, The Big Truck That Went By, was shortlisted for the PEN/John Kenneth Galbraith Award for Nonfiction and won the Overseas Press Club's Cornelius Ryan Award, the J. Anthony Lukas Work-in-Progress Award, and the WOLA/Duke Book Award for Human Rights in Latin America. His work appears in the New York Times, Foreign Policy, and elsewhere. Katz was a New America national fellow in the Future of War program and received a fellowship from the Logan Nonfiction Program. He lives with his wife and daughter in Charlottesville, Virginia.

“One of the Best Nonfiction Books of 2013” —Kirkus Reviews

“Katz's blow-by-blow reportage of the quake and its immediate aftermath is riveting. The book's deeper structure offers a concise and accurate history of Haiti from its revolutionary origins to the present day, and a clear and cogent analysis of how and why the massive, expensive effort to rebuild the country after the quake has, for the most part, failed… required reading for anyone who wants to understand Haiti.” —The Nation

“Katz eloquently blends personal anecdotes and Haitian history with in-depth reportage to show how one catastrophe led to so many more, and how, three years later, Haiti has barely moved forward… One hopes that the policymakers involved in helping Haiti read this book and take it to heart.” —Associated Press

“Gripping… forces a confrontation with the hubris and double standards of international aid...a critique made more powerful by the perspective it includes. Katz combines the knowledge of Haiti he built over 3-1/2 years working there with his understanding of outsiders' clichés about poor, impoverished countries.” —The Christian Science Monitor

“Some of the scenes in Katz's book rival anything that you would find in Graham Greene's classic 1966 novel about Haiti, 'The Comedians.'” —The Seattle Times

“Compelling ...damning ...wry...This is a book without heroes -- not Bill Clinton, the United Nations special envoy to Haiti; not Sean Penn, the Hollywood star who runs a huge camp there; not René Préval, the reclusive president; and certainly not the international community and its competing, self-aggrandising NGOs, which got so much so wrong.” —Times of London

“Katz succeeds in transporting the reader straight into the midst of the events he describes so eloquently, without attempting to gloss over the harshness of everyday life in Haiti, both before and after the earthquake. He provides excellent background information on the country and its society, and his arguments are balanced and nuanced.” —The Boston Globe

“A top-notch account of Haiti's recent history, including the January 2010 earthquake, from the only American reporter stationed in the country at the time …An eye-opening, trailblazing exposé.” —Kirkus Reviews (starred)

“Wise, deeply reported… both a primer on how and why reconstructions fail, and an indictment of the benign paternalism that motivates donors, developers, and other do-gooders…a stark, compelling first-person account.” —Justin Peters, Columbia Journalism Review

“Beautifully-written, brave, and riveting, The Big Truck That Went By tells the devastating story of the post-earthquake reconstruction effort in Haiti. Weaving together his personal experiences with the knowledge gained from his intensive investigative report, Katz offers us an autopsy of a global relief effort gone wrong. But the book also offers us a moving portrait of the courage, humor, and vision of the Haitians he worked with, offering a glimpse of the possibilities for a different future. Anyone seeking to understand Haiti's current situation, as well as the broader impasses of our current model of aid, should read this book.” —Laurent Dubois, author of Haiti: The Aftershocks of History

“With lucidity and great humanity, Jonathan Katz has written THE book on Haiti's devastating earthquake and its bungled reconstruction. For anyone who wants to know why the "international community" can't fix anything anymore, but who still hope to find solutions to global problems, this book is a must-read.” —Jon Lee Anderson, bestselling author of Che Guevera: a Revolutionary Life

“A brilliant piece of writing… the best description of living through the Haiti quake I've read anywhere.” —Jonathan Alter

“Katz is a great storyteller who enmeshes the reader in a lively web of history, incident, and examples of humanity pushing through disaster, hard luck, iniquity, and triumph to muck it up all over again.” —The judges of the J. Anthony Lukas Work-in-Progress Award

“The horror of the catastrophic Haitian earthquake of 2010, the adrenaline rush of being a reporter in the middle of dramatic events, the frustration of watching local politicians and poorly informed outsiders combine to paralyze the recovery effort, and the joy of finding love in the midst of the ruins: it's all here. Katz, the only American journalist on the scene when the earthquake struck, gives us unique insights into the plight of a close neighbor whose fate is vitally connected to our own.” —Jeremy Popkin, author of You Are All Free: The Haitian Revolution and the Abolition of Slavery

“ Jonathan M. Katz has a passion for the truth. He has shown respect for the people of Haiti by seeking that truth throughout the earthquake and the aftermath... This is an important book, and a page-turner!” —Mark Doyle, BBC correspondent

“With every page of Jonathan Katz's book I cringed, grr'ed and couldn't wait to turn for the next revelation. Hubris, America! Thought we could wave a magic wand and save Haiti? Non, merci. Bravo to Katz for telling the real story.” —Laurie Garrett, author of I Heard the Sirens Scream

“Jonathan Katz's strength is his unique combination of heart, history and solid reporting, brilliantly married in The Big Truck That Went By. Readers experience the country through his personal roadmap, one that is both sympathetic and yet sharply critical of all that could have gone right, but didn't.” —Kathie Klarreich, author of Madame Dread: A tale of Love, Vodou and Civil Strife in Haiti

“From the exploits of international stars like Sean Penn and native son Wyclef Jean of the Fugees, to the muddled planning that can result in unmitigated disasters like the cholera outbreak caused by insufficiently vaccinated Nepalese peacekeepers, Katz paints a thoroughly researched picture of (mostly) good intentions gone astray, leaving readers suspended somewhere between fragile hope and outright fury.” —The Montreal Gazette

“On Jan. 12, AP correspondent Jonathan Katz was about to leave Haiti after two years. He survived through sheer luck, camped out in the courtyard of an intact hotel, and stayed to record the impact of the disaster. His new book The Big Truck That Went By is the single most comprehensive and understandable account of what happened, and why.” —The Tyee

“Katz brings an on-the-ground flavor to his depiction of events that is more vivid than those in the more ponderous tomes published in the wake of the calamity… His minute dissection of the failure of most of the promised aid and the misdirection of much of what did arrive is a valuable contribution to understanding how the international community should respond to such crises in the future.” —The Miami Herald

“Katz presents an engaging first-person account of the quake and the first year of the international response that followed.” —Reason magazine

“Offers a compelling account that is alternately comic and tragic.” —The Louisville Courier-Journal

“Katz was the only American reporter on the ground when the devastating earthquake struck Haiti on January 12, 2010…Debunks the assumption that a disaster leads to social disintegration or rioting and observes how media sensationalism prompted unwise giving.” —Publishers Weekly

“A captivating look at Haiti's history, people and politics ... a great primer on the challenges of reporting the news in a disaster zone.” —June Thomas, Slate book critic

“The despair and love of Haiti in one earthquake story.” —The New York Times Magazine

“Essential... Katz exposes the machinations behind the international reconstruction effort, weaving in a firsthand account of the day of the disaster.” —Los Angeles Review of Books

“Ultimately, Katz's book is both an eloquent and heartbreaking reminder that it takes much more than good intentions to end a humanitarian crisis.” —The Financialist

“[Katz] is able somehow to create this story that has intense drama even when there's a press conference with Bill Clinton and some rich donors about how to get money to Haiti ... It's an amazing story of disaster and survival, and then government and bureaucracy, that I'm having trouble thinking of a comparison to ... Just buy it and talk about it with people.” —David Weigel, Slate

“Julian Fantino, Canada's minister in charge of the Canadian International Development Agency, recently wondered why Haiti, with so many unemployed, is covered in garbage--despite all the aid money that has poured into the country since its devastating 2010 earthquake. He would probably learn a lot from this book.” —Michael Petrou, Maclean's

“The best book yet on the earthquake and its on-the-ground consequences.” —Haiti Support Group

“A vivid and disturbing account of how international aid donors, the United Nations and celebrity do-gooders tripped over themselves to help [after the Haitian earthquake] but ended up doing more harm than good.” —Times Literary Supplement