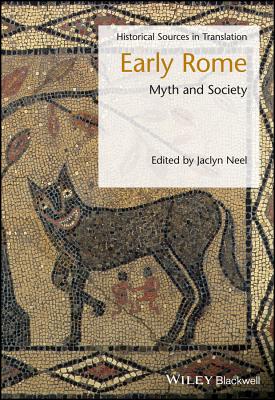 The scholarly community has become increasingly aware of the differences between Roman myths and the more familiar myths of Greece. Early Rome: Myth and Society steps in to provide much-needed modern and accessible translations and commentaries on Italian legends.

This work examines the tales of Roman pre-and legendary history, discusses relevant cultural and contextual information, and presents author biographies. This book offers updated translations of key texts, including authors who are often absent from classical mythology textbooks, such as Dionysius of Halicarnassus and Servius. Editor Jaclyn Neel debunks the idea that Romans were unimaginative copyists by spotlighting the vitality and flexibility of Italian myth -- particularly those parts that are less closely connected to Greek tales, such as the story of Caeculus of Praeneste. Finally, by calling attention to the Italian rather than Roman nature of the collection, this book suggests that Roman culture was broader than the city itself. This important work offers:

Fresh and readable, Early Rome: Myth and Society offers essential reading for students of ancient Rome as well as those interested in Roman and Greek mythology.

Jaclyn Neel, PhD (2012) University of Toronto, is currently a Visiting Assistant Professor at York University. She has published in Classical Quarterly (forthcoming 2015) and Vetus Testamentum (2012). Jackie received her BA in Classics from Columbia University and her PhD in classics and ancient history from the Collaborative Program in Ancient History at the University of Toronto. Her research centers around questions of competition and kingship in Rome, with a specific focus on foundation figures. Her first book analyzed themes of competition in the myths of Rome, and her second will translate key texts on Roman mythology. In the next few years, she will focus more closely on Cicero. She also runs blog on resources for the study of antiquity.