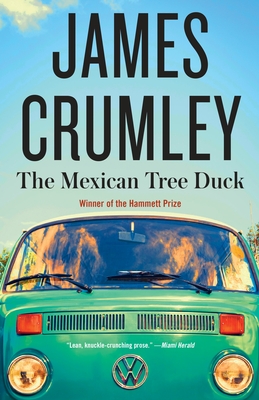 This is book number 2 in the C.W. Sughrue series.

WINNER OF THE DASHIELL HAMMETT AWARD

One night up in Montana, C.W. Sughrue sets his seedy bar’s pricey jukebox in front of an oncoming freight train. When predictable results ensue, he needs to find a way to make some money and pay back the jukebox company. So even though Sughrue’s officially retired from P.I. work, he picks up one small-time case involving some kidnapped fish. That fishy trail leads to a much bigger case involving a Texas politician's kidnapped wife, a valuable piece of pre-Columbian pottery, and a single mother who packs guns and stolen goods in her infant son's diaper bag.

James Crumley was born in Three Rivers, Texas, and spent most of his childhood in South Texas. After serving three years in the U.S. Army and completing college degrees in history (BA, Texas College of Arts and Industries) and creative writing (MFA, University of Iowa), he joined the English faculty at the University of Montana at Missoula. He was also a visiting professor at a number of other institutions around the country, including the University of Texas at El Paso, Colorado State University, Reed College, and Carnegie-Mellon. His works include a novel of Vietnam, One to Count Cadence, and seven detective novels: The Wrong Case, The Last Good Kiss, Dancing Bear, The Mexican Tree Duck, Bordersnakes, The Final Country, and The Right Madness. He died in Missoula in 2008.

“Like James Ellroy . . . [Crumley] is a master of American vernacular, turning tough-guy slang into something like poetry.” —The Independent (London)

“The journey, with all its wild, wicked, sweet, painful, courageous, outrageous, and obscene encounters . . . will stay with the reader after the blood dries.”
—The New York Times

"The pleasures of a James Crumley novel . . . derive mostly from the zing of its characters, the bite of its epigrams ("The bear of real life is waiting for everybody"), and a restless, almost manic vitality--prose on amphetamines. . . . The mix of black humor, violence, and trivia is . . . persuasive, and the setting is evoked as crisply as the landscape of an Ansel Adams photograph."
--Entertainment Weekly

“A surrealistic, raunchy buddy novel. . . . Tough writing with a manic edge and a neat surprise at the end.” —New York Daily News

“Powered by sex, drugs, rock’n’ roll, firepower, and a large portion of irreverence, The Mexican Tree Duck is one you won’t want to miss.”
—Rocky Mountain News

“There’s [a] hypnotic craziness, that affectation for excess, expressed in profane and compelling and ultimately romantic language, that makes you keep reading The Mexican Tree Duck. Too much is never even close to enough for Crumley.”
—Minneapolis Star Tribune