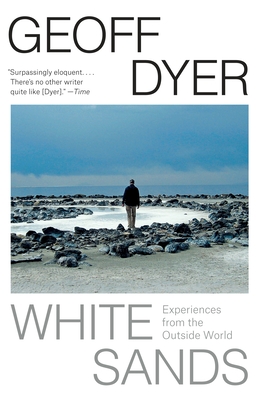 In White Sands, Geoff Dyer (“one of the funniest writers alive” —Chicago Tribune) finds himself on the road again, crisscrossing the globe from French Polynesia to northernmost Norway. Throughout his adventures—with a tour guide who may not be a tour guide in the Forbidden City in Beijing; with friends in New Mexico, where D. H. Lawrence famously claimed to have had his “greatest experience from the outside world”; with Don Cherry (or a photo of him, at any rate) at the Watts Towers in Los Angeles—Dyer interweaves fiction and nonfiction to craft an often hilarious, always inquisitive travelogue about the questions we ask when we step outside ourselves.

A Fellow of the Royal Society of Literature and a member of the American Academy of Arts and Sciences, Geoff Dyer has received the Somerset Maugham Award, the E. M. Forster Award, a Lannan Literary Fellowship, a National Book Critics Circle Award for criticism, and the Windham Campbell Prize for nonfiction. The author of four novels and nine works of nonfiction, Dyer is writer in residence at the University of Southern California and lives in Los Angeles. His books have been translated into twenty-four languages.

“Surpassingly eloquent. . . . There’s no other writer quite like [Dyer].” —Time

“Perhaps the most brilliantly original practitioner of his generation… I here and now acknowledge the work of Geoff Dyer, once and for all, to be forgivable cause for any writer’s jealousy.” —Jan Morris, The Spectator

“Reading Dyer is like taking a trip around the world with your best-read, wittiest, most interesting friend.” —O, The Oprah Magazine

“A rumination on the meanings we assign the strange destinations of our pilgrimages. . . . [Dyer is] a neurotic Siddhartha, forever going on hopeful pilgrimages that wind up leaving him disappointed and hollow, the brunt of a much larger cosmic joke.” —The New York Times