The After Party: Poems (Paperback) 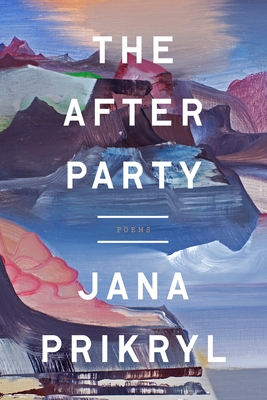 Jana Prikryl’s The After Party journeys across borders and eras, from cold war Central Europe to present-day New York City, from ancient Rome to New World suburbs, constantly testing the lingua francas we negotiate to know ourselves. These poems disclose the tensions in our inherited identities and showcase Prikryl’s ambitious experimentation with style.

“Thirty Thousand Islands,” the second half of the collection, presents some forty linked poems that incorporate numerous voices. Rooted in one place that fragments into many places—the remote shores of Lake Huron in Canada, a region with no natural resources aside from its beauty—these poems are an elegy that speaks beyond grief.

Penetrating, vital, and visionary, The After Party marks the arrival of an extraordinary new talent.

A New York Times Best Poetry Book of the Year

“Remarkable. . . . Unusually vivid. . . .  Brilliant and funny. . . . A sensory autobiography that examines tragic material with a friendly scrutiny. . . . Language in this enchanted book sometimes seems to have an independent intelligence.” —Dan Chiasson, The New Yorker

“Prikryl’s debut is a gratifying demonstration of (among other things) the warmth and wit of poetry’s formal architecture.” —David Orr, The New York Times

“Delightful. . . . Marvelous. . . . The poems in The After Party have a quality of attention, a presence of a probing intellect alert to the strangeness of our lives as well as our own estrangement from ourselves.” —Charles Simic, The New York Review of Books

“Potent and pleasing. . . . A poet’s debut elevates the everyday and nods to influences from the past. . . . Jana Prikryl’s readers will quickly discover such rueful humor is typical of her understated sensibility . . . . Prikryl is most fascinated by the unpredictable zigs and zags of an imagination in motion, and language’s laughable (but reliably amusing) incapacity to map that course precisely.” —Joel Brouwer, The New York Times Book Review

“Jana Prikryl’s first volume of poetry, The After Party, announces a wholly original talent. The voice is labile--at once witty, wry, astringent, funny, wise and unfathomable. This collection is full of surprises. In her hands, form is an endlessly malleable thing. I felt pure exhilaration reading it.” —Neel Mukherjee, The New Statesman

“Canny, knowing. . . . Prikryl is not afraid of tearing up the rule book. . . . Her best poems are intimate, sprightly, and darkly insinuating.” —William Logan, The New Criterion

“The year’s most impressive debut.” —Flavorwire

“Fastidious, vulnerable, and moving. . . . Time is almost an embodied character here, its collapsing and bad behavior pivotal to some of Prikryl’s most affecting personal narratives.” —Declan Ryan, The Times Literary Supplement

"It's unusual to come upon a body of work by a poet hitherto unknown to one and find it a complete, self-contained universe of its own, totally original and separate from current poetic modes. Jana Prikryl's is such a case. I am reminded of Wallace Stevens's title, "A Completely New Set of Objects," except that her poetry doesn't really include objects, but is more like a private biosphere subject to its own climate conditions and laws of growth. Her subject is life as it is currently being lived, and the landscapes it traverses. They are like the ones we all know, yet transformed as though by a dream. The After Party is a truly moving book." —John Ashbery

“Nimble, even acrobatic, cutting but never slashing, always clever but never merely so, Prikryl’s poems belong to the great line of wit; they make the intolerables of this life--our islanded existence, our mortality--bearable. And what a mind this poet has, self-skeptical but always curious, encompassing declarations and speculations from the winsome to the recondite. We can say to her, delightedly, what she says more sadly: "I’d put / nothing past you.” —Stephen Burt

“Jana Prikryl’s debut collection is, to borrow her phrase, ‘unswervingly superb,’ though it’s indicative of this playful, surprising, hyper-smart work that the poet applies it to a ‘caramel’ brunette’s ‘taste in shoes.’ Prikryl’s work is replete with the right, odd detail, and animated by a swift feverish grace. Her lines are beautifully turned, and as at ease with Latinate high irony as Anglo-Saxon idiom. Prikryl has the skill of being interesting, and has composed a book that is not just ‘susceptible to the consolations/of analogy’--but is itself a consolation.” —Nick Laird