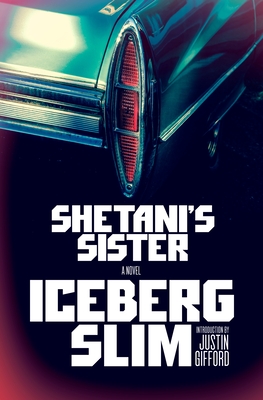 Here is the newly discovered novel by Iceberg Slim, the creator and undisputed master of African-American "street literature," a man who profoundly influenced hip hop and rap culture and probably has sold more books than any other black American author of the twentieth century (not that he saw the royalties from those sales). In many ways Iceberg Slim's most mature fictional work, Shetani's Sister relates, in taut, evocative vernacular torn straight from the street corner, the deadly duel between two complex anitheroes: Sergeant Russell Rucker, an LAPD vice detective attempting to clean up street prostitution and police corruption, and Shetani (Swahili for Satan), a veteran master pimp who controls his stable of whores with violence and daily doses of heroin.

Iceberg Slim, also known as Robert Beck, was born in Chicago in 1918 and was initiated into the life of the pimp at age 18. He briefly attended the Tuskegee Institute but dropped out to return to the streets of the South Side, where he remained, pimping until he was 42. After several stints in jail he decided to give up the life and turned to writing, crafting most famously his autobiographical classic, Pimp: The Story of My Life. He died in 1992.

Praise for Iceberg Slim and Pimp: The Story of My Life:

"What shines through is one man's desperate attempt to be something, no matter how sad that something appears to us. And it is literature. It has influenced thousands of young Americans... We don't need to idolize him but we do need to respect him as a writer who told what he knew of the truth."
--Sapphire, in her 1998 introduction to Pimp

"The works of Robert Beck, aka Iceberg Slim, have made a powerful impact on our global cultural landscape and should be essential reading. We have to get beyond his life as a pimp, and accept him as one of the most influential writers of our age."
--Irvine Welsh, The Guardian

''One of the greatest black writers in American history.''
--Ice-T

"All the questions of life can be answered if you read this book."
--Chris Rock

"Iceberg Slim does for the pimp what Jean Genet did for the thief."
--The Washington Post