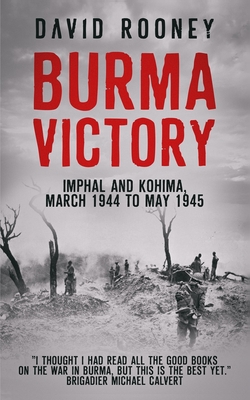 "I thought I had read all the good books on the war in Burma, but this is the best yet." Brigadier Michael Calvert

This is the story of the Fourteenth Army in Burma and the two great battles of Imphal and Kohima, in which the Japanese suffered the greatest defeat in their history.

In 1942, following their lightning strikes on Pearl Harbor and Hong Kong, the Japanese invaded Burma.

British forces were rapidly driven out, following a swift and total defeat. The British and Indian forces retaliated with limited offences and with mixed results.

The Japanese advance continued, driving victoriously for the domination of Asia. Then came the Japanese attack of Imphal and Kohima, starting one of the most ferocious campaign of the war.

Burma Victory portrays the "forgotten war" and the Allied fight to push the Japanese out of Burma.

David Rooney - who saw war service in India and West Africa - tells the story of the campaigns of the new Fourteenth Army, under the command of the remarkable General Slim.

Rooney captures the ebb and flow of battle and the roles of Wingate, Stilwell and the Chindits. In doing so, he offers a new analysis of the role of airpower and highlights the influence of British, American, Japanese and Chinese thinking at the highest level.

Burma Victory is essential reading for anyone interested in General Slim, the Second World War and how defeat can be turned into victory.