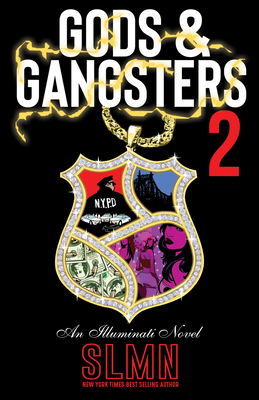 This is book number 2 in the Gods & Gangsters series.

"Bloodthirsty and thrumming, an original take on the source material. ...   The writing is skillfully evocative, and readers will appreciate the excitement of a high-stakes power play " - Kirkus Reviews

Trust no one,not even those closest to you, the brothers you grew up with on the corners,the woman who lies beside you at night. Make the mistake of trusting them,  you die or they die, because the only way for two people to keep a secret is if one of them is in the ground. Same as it ever was.

When a new power rises up on the streets the game changes. Othello announces himself in furious violence, taking down the old gods and gangsters of the city. His crew are at his side, he is the man, but unseen around him fractures are forming, loyalties breaking . The only way to become the king is to kill the king... and he has a target on his back.

SLMN lives off the grid. He is a ghost. There are those who want him dead. He lives a life on the move, just him and his Ducati Monster, driving from town to town. He rarely settles in one place for more than a few weeks at a time before he feels the need to move on. He doesn't own a phone, a computer or other trackable device. In one life he has fought injustice wherever he has seen it, spending several years in developing nations helping those who couldn't for whatever reason help themselves. He worked on projects to bring fresh water to areas without it, to provide sex and health education and secure vital aid in war torn regions. He has served on peace-keeping forces, campaigned against the deployment of landmines, and in the last decade devoted his life to ecological issues--most notably combating the illegal trade in endangered species. He has witnessed atrocities no man should ever see, and glimpsed the secret inner workings of the world run by the rich and powerful, making him enemies of some of the most dangerous men in the world. Never once has he walked away from a fight. In another life, SLMN has produced a number of movies and is both a New York Times and USA Today Bestselling Author.

"Frighteningly realistic...With fast-paced action....a fun and exciting read with a wide appeal perfect for fans of complex series heroes like Jack Reacher and Joe Ledger, with a dash of Dan Brown sensibility."
--Booklist on Sunfail

"Does fiction get much darker ... Deliberate and creepy, this taps into genuine human traits like fear, greed, and stupidity."
--Library Journal' on Sunfail

"Any readers who have been fans of Dan Brown's conspiracies will enjoy."
--New York Journal of Books on Sunfail