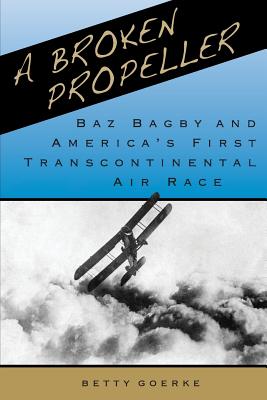 A Broken Propeller is the story of America's first transcontinental air race. Pilots in this dangerous adventure flew WWI planes with open cockpits and no parachutes.

In October 1919 fifty-nine pilots competed in a round trip race that began simultaneously on Long Island and in San Francisco with predetermined stops 150 miles apart at airfields across the United States. Newspapers gave it front-page press: who was ahead, who was missing, who made an unexpected emergency landing, who crashed, and who was felled by blinding snowstorms.

The race was conceived by Brig. Gen. Billy Mitchell to promote the future of flight in the United States, but all did not go as planned. There were 54 crashes and seven deaths. Pilots landed on rooftops, in Lake Eire, and the front-runner had his dog with him. The predominant plane in the race, the DH-4, had life-threatening flaws. Pilots faced heavy rain, gale winds, snow, ice, and treacherous landing fields. As a result they lost their way, and made courageous and foolhardy decisions. There were comic moments, and poignant ones. The future head of the Air Force, Gen. Carl A. Spaatz was a feisty participant. The heroes were the ranchers and farmers who helped downed airmen with food, lodging and fuel.

There has never been a book about this extraordinary moment in American history. The author is fortunate to have what earlier reports lacked: memoirs of pilots, plus the charming and humorous letters and log of a participant in the race, her father, one of only eight who completed the race. 1st Lt. Ralph (Baz) Bagby was a former professional baseball player and an MIT graduate.