Forging the Blade Book One of the Mage Web Series (Paperback) 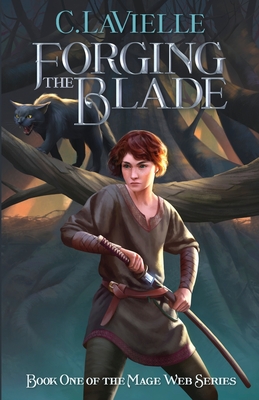 An Adventure Through the Tarot Major Arcana:

Sixteen-year-ole Molly Adair would love to spend all her time in WarCraft Universe. On-line she is darkfire, a sexy wizard who fights dragons and saves kingdoms. In real life, she's a chubby nerd with cut scars tracking up her arm, a knot in her stomach that won't fo away, and a nightmare of plunging through screaming blackness that slams her awake every night. Her life totally sucks and Molly is sure it can't get any worse...

Until her parents die in a plane crash and a terrifying shadow begins to haunt her. A mysterious grandmother appears and whisks her away to Portland, Oregon, where a bizarre young man materializes in her bedroom, clicks a button on his smart phone and sends her screaming into the land of Damia.

The kingdom is at war, a rogue dragon is terrorizing the courtryside, and the shadow continues to stalk close at her heels. A magical black cat and a gypsy's promise are Molly's only guides home.

On her journey Molly experiences each of the tarot major arcana cards, beginning with The Fool, Chapter 0, and ending with The World, Chapter 21.