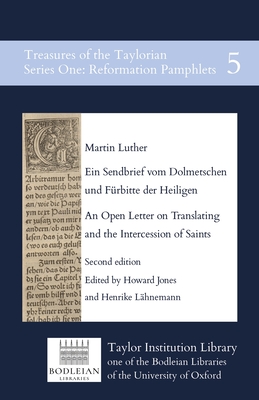 Martin Luther's Open Letter on Translation and the Intercession of Saints (1530) is a seminal work in German literature, translation studies, and Reformation theology. It has influenced authors and translators such as Johann Wolfgang von Goethe, Friedrich Schleiermacher, Walter Benjamin, Martin Buber, and Franz Rosenzweig. For the 500th anniversary of Luther's translation of the New Testament, this expanded second edition provides a complete framework to understand the context, theology, book-history, and language of the work. The new edition offers advice on how to read Luther's German as well as extensive linguistic footnotes and a revised translation, bringing to life the power, subtlety, and humour of Luther's prose. New, introductory material offers a life-story of the Oxford copies of the work before and after they arrived in Oxford. The introduction also includes an investigation into why Luther dealt with Bible translation and saintly intercession in the same work and argues that the two topics are linked by debates going on at the time at the Diet of Augsburg and in Nuremberg, where the pamphlet was printed.

The edition is part of the Reformation Pamphlet series of the Taylor Institution Library in Oxford which aims to make the treasures of the library accessible via open access editions on https: //editions.mml.ox.ac.uk/ and to bring together interdisciplinary expertise on different aspects of these historic holdings. Reformation historian Ulrich Bubenheimer identifies for the first time the addressee of the Sendbrief, linguist Howard Jones offers insights into the translation process, and Germanist Henrike L hnemann adds the book-historical perspective.

In the Open Letter on Translation Luther offers general advice on translation as well as a defence of some of the specific translation choices he made in his German New Testament. From these it becomes clear what his guiding principles were as a translator: an intimate knowledge of the source and target language, a feel for the idiom of both, and an understanding of the author's purpose. The same questions preoccupy translators today, whether they are working with sacred texts or not. The Open Letter affords us a glimpse into the translation technique of one its most successful exponents.

The Open Letter also gives us a taste of Luther's style and method of argument. His syntax and vocabulary are plain and direct, his tone sometimes academic but more often informal, and the text is interspersed with colourful turns of phrase. His arguments are, in keeping with academic discourse at the time, a combination of appeals to reason or authority, ridicule, and invective. In the Open Letter we have Luther, at one point, analysing the Hebrew, Greek, and Latin precedents to argue against the translation, 'Mary, full of grace', and, at another, summarizing his attitude to Dr Snotty-Nose and his other detractors as follows: 'The fact is, a donkey doesn't need to do much braying: you just have to look at his ears'.

This new edition of the Open Letter introduces the work to the modern reader, and the translation aims to bring Martin Luther's irreverent and brilliant rhetoric to life, as the great practitioner explains his methods and principles.