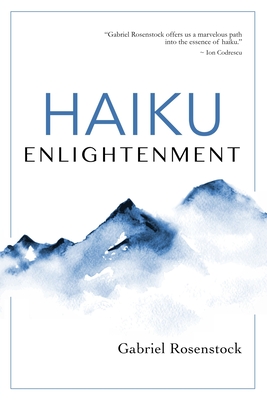 By Gabriel Rosenstock
$16.95
Not On Our Shelves - Available to Order

Haiku Enlightenment is a delightful, often playful look at haiku as both a poetic craft and a pathway of awakening - for poets, seekers and creative rebels. Gabriel Rosenstock has given us a rich collection of insights, distilled from a lifetime dedicated to the art and practice of poetry, on stepping into inspired moments. Using a generous selection of contemporary and classical haiku, he explores ideas of creativity and perception, encouraging us to calm the restless mind, notice what is overlooked, explore the world around us, and fully encounter each glowing moment. From such moments, haiku - and enlightenment - emerge. Praise for Haiku Enlightenment: "Gabriel Rosenstock offers us a marvelous path into the essence of haiku and the state of being in harmony with the laws of the universe."
- ION CODRESCU
Romania
Poet and renowned haiga artist
Poet and haiga artist
Author-illustrator of Something Out of Nothing: 75 Haiga and Haiga: Peindre en po sie "A learned, imaginative and profound commentary on haiku with many outstanding examples from around the globe, demonstrating the form's universal appeal. Persons with little knowledge of haiku will be captivated, while those with expertise will feel renewed..."
- GEORGE SWEDE
Canada
Co-founder of Haiku Canada, editor of Global Haiku: Twenty-Five Poets Worldwide and author of Almost Unseen: Selected Haiku "Rosenstock is an excellent teacher, wise enough to realise that in describing haiku (as in so many other things) examples are worth a million words. He spreads before us a variegated tapestry of haiku, by poets in all places and at all times since haiku began, as well as from his own ingenious pen, in which 'the spirit of play and the play of spirit are simultaneous and one'."
- DAVID COBB
England
Founder of the British Haiku Society, editor of The Humours of Haiku and The British Museum Haiku "From the wealth of his experience, Rosenstock gives profound advice and useful tips for the wanderer on the haiku path, showing us how sudden enlightenment can happen in our ordinary life."
- RUTH FRANKE
Author of Lapislazuli and Slipping Through Water "With edifying purpose, the author subtly introduces examples of haiku's apocalyptic potential of transfiguration, known in haiku and Zen as 'spiritual interpenetration' and, by so doing, offers the reader an opportunity to witness-through numinous haiku moments-the entwining of the Universal Spirit with Its Self."
- JAMES W. HACKETT
Author of The Way of Haiku, Zen Haiku and Other Zen Poems, and A Traveler's Haiku