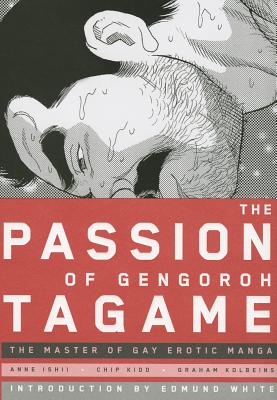 Think Tom of Finland, only harder, better, faster, and stronger.

Violent, visceral and provocative, to say the least, Gengoroh Tagame's unquestionable talent for story and illustration is already the stuff of legend. His gay BDSM stories are now widely celebrated for both their virtuosic drawing and their unparalleled passion. Produced by a veteran Japanist--Anne Ishii--The Passion of Gengoroh Tagame is a project that began some years ago, when Ishii was translating Chip Kidd's personal Tagame collection and decided to reach out to him. Inspired by filmmaker Graham Kolbeins' online work with gay comics, the project took on new ambitious proportions, materializing in this exciting celebration of one of the world's most poignant erotic artists. This hefty Tagame omnibus includes ten English editions of short stories dating from the late 1990s to 2012. The newest work is an original story commissioned by Kidd himself: Tagame's very first foray into writing directly for an American reader. Celebrated novelist and biographer Edmund White contributes an introduction to the volume.
Gengoroh Tagame (born 1964) is a legend in gay comics throughout the world and in the American underground, where loyal fans have quietly shared foreign-language editions of his groundbreaking work in the outermost edges of bondage and pornography. Beyond the comic book format, Tagame's original artwork has been exhibited internationally and paired with the works of Tom of Finland. Tagame was also the founding Editor and Art Director of Japan's most widely circulated gay journal, G-Men.