Mighty Be Our Powers: How Sisterhood, Prayer, and Sex Changed a Nation at War (Hardcover) 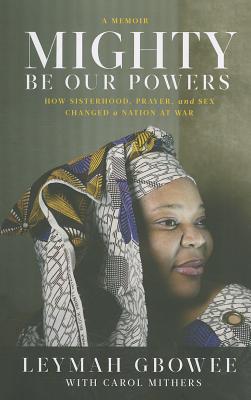 By Leymah Gbowee, Carol Mithers (With)
Unavailable, our apologies.
Out of Print

WINNER OF THE 2011 NOBEL PEACE PRIZE

In a time of death and terror, Leymah Gbowee brought Liberia’s women together—and together they led a nation to peace.

As a young woman, Leymah Gbowee was broken by the Liberian civil war, a brutal conflict that tore apart her life and claimed the lives of countless relatives and friends. Years of fighting destroyed her country—and shattered Gbowee’s girlhood hopes and dreams. As a young mother trapped in a nightmare of domestic abuse, she found the courage to turn her bitterness into action, propelled by her realization that it is women who suffer most during conflicts—and that the power of women working together can create an unstoppable force. In 2003, the passionate and charismatic Gbowee helped organize and then led the Liberian Mass Action for Peace, a coalition of Christian and Muslim women who sat in public protest, confronting Liberia’s ruthless president and rebel warlords, and even held a sex strike. With an army of women, Gbowee helped lead her nation to peace—in the process emerging as an international leader who changed history. Mighty Be Our Powers is the gripping chronicle of a journey from hopelessness to empowerment that will touch all who dream of a better world.

Leymah Gbowee is the winner of the 2011 Nobel Peace Prize. She is also the "Newsweek" and "The Daily Beast"'s Africa columnist. As war ravaged Liberia, Leymah Gbowee realized it is women who bear the greatest burden in prolonged conflicts. She began organizing Christian and Muslim women to demonstrate together, founding Liberian Mass Action for Peace and launching protests and a sex strike. Gbowee's part in helping to oust Charles Taylor was featured in the documentary "Pray the Devil Back to Hell." Gbowee is a single mother of six, including one adopted daughter, and is based in Accra, Ghana, where she is the cofounder and executive director of the Women Peace and Security Network-Africa.Carol Mithers is a Los Angeles-based journalist and book author. Her work has appeared in a wide variety of national publications.

Archbishop Desmond Tutu, Nobel Peace Prize Laureate, 1984
“Mighty Be Our Powers reminds us that even in the worst of times, humanity’s best can shine through.”

Sheryl Sandberg, COO Facebook:
“One of the most inspirational and powerful books I’ve ever read. The story of one woman’s struggle against the worst and what she can teach all of us about finding the courage and strength to change the world.”

Reverend Dr. Calvin O. Butts, III Pastor, The Abyssinian Baptist Church in the City of New York:
"An engrossing, fluently written story that anyone who cares about changing the world has to read."

Ellen Johnson Sirleaf, President of Liberia, Nobel Peace Prize Laureate, 2011:
“Leymah bore witness to the worst of humanity and helped bring Liberia out of the dark. Her memoir is a captivating narrative that will stand in history as testament to the power of women, faith and the spirit of our great country”

STARRED Kirkus Review:
“Searing war-torn memories from a visionary African peacekeeper and women’s-rights activist….Gbowee stands responsible for what began as a tireless vocal demonstration and soon escalated to a standoff on the Presidential Mansion steps demanding peace. This course of action facilitated the war’s end in 2003 and the election of Africa’s first female president, and ended the author’s personal struggles with alcohol. With commanding charity, Gbowee celebrates Liberia’s eight years of peace and continues teaching young women about the power of activism. A patriotic chronicle reverberant with valor and perseverance.”