A Question Mark Above the Sun: Documents on the Mystery Surrounding a Famous Poem by Frank O'Hara (Paperback) 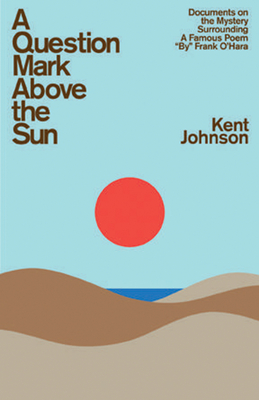 Part study of the beautiful relationship between two famed School Poets, part in depth analysis of ‘A True Account of Talking to the Sun On Fire Island’ this ‘thought experiment’ is unique in its approach. Johnson’s theory that Frank O’Hara’s most famous poem wasn’t written by him at all feels like a mashup of Anne Carson, a lit-crit review, & a modernist, deeply academic, murder mystery novel, ultimately begging the question: does it matter who wrote it?

At the end of last year, an extraordinary work of detective criticism briefly appeared, despite legal threats. Kent Johnson's A Question Mark Above the Sun (Punch Press) movingly speculates that Kenneth Koch forged one of Frank O'Hara's greatest poems as a posthumous tribute to his friend. A noir-ish middle also recounts some very funny run-ins with the English avant-garde. Shame on the poets who forced its redaction and suppression. - Jeremy Noel-Tod, The Times Literary Supplement, including a previous edition of A Question Mark Above the Sun as one of its 2011 Books of the Year

What you have in your hands is a kind of thought-experiment. It proffers the idea that a radical, secret gesture of poetic mourning and love was carried out by Kenneth Koch in memory of his close friend Frank O'Hara. I present the hypothesis as my own very personal expression of homage for the two great poets. The proposal I set forward here, nevertheless, is likely to make some readers annoyed, perhaps even indignant. Some already are. A few fellow writers, even, have worked hard through legal courses to block this book's publication. The forced redaction of key quotations herein (replaced by paraphrase) is one result of their efforts.

In this self-described thought experiment--part fiction, part literary detective work, and always daring--Kent Johnson proposes a stunning rewrite of literary history. Suppressed upon initial release, this is a one-of-a-kind book by one of our most provocative contemporary authors.

This book of experimental criticism is, at the least, of forensic interest to readers of poetry and, at the most, a study in extremes of generosity and stinginess. Whether it is Johnson (Homage to the Last Avant-Garde) who is generous and his detractors stingy--or vice versa--is another question altogether. The author delights in thought experiment s] and provocation: his book offers readers, among other things, an unfinished critical novella containing a startling hypothesis about poets Frank O'Hara and Kenneth Koch: Is it possible that O'Hara's last poem, A True Account of Talking to the Sun at Fire Island, was authored, in truth, by his friend Koch in the wake of O'Hara's sudden death by dune buggy on Fire Island? The author argues that the poem may have been written by Koch and deliberately attributed to O'Hara in an act of egoless munificence. Unfortunately, because Johnson was denied permission to quote from the (conceivably elegiac) poem under discussion, the text is full of odd elisions. As if to make up for this deficiency, the book is padded with essays by the author's partisans, who defend his critical methods, some with eloquence. Though this rarefied text will likely appeal to a similarly niche audience, Johnson's work is admirable for its imagination and inventiveness.--Publishers Weekly

Kent Johnson is the author, translator, or editor of nearly 30 books of poetry and criticism, including Beneath a Single Moon: Buddhism in Contemporary American Poetry (Shambhala, 1991), Doubled Flowering: From the Notebooks of Araki Yasusada (Roof Books, 1998), and the collection of poems, Homage to the Last Avant-Garde (Shearsman Books, 2008). Johnson lives in Illinois, where he has been a faculty member in English and Spanish at Highland Community College. In 2005, he was named "State Teacher of the Year" by the Illinois Community College Board of Trustees. Johnson has also received a National Endowment for the Arts fellowship for his translation of Bolivian poet Jaime Saenz's The Night.

Kent Johnson is the author, translator, or editor of nearly 30 books of poetry and criticism, including Beneath a Single Moon: Buddhism in Contemporary American Poetry (Shambhala, 1991), Doubled Flowering: From the Notebooks of Araki Yasusada (Roof Books, 1998), and the collection of poems, Homage to the Last Avant-Garde (Shearsman Books, 2008). Johnson lives in Illinois, where he has been a faculty member in English and Spanish at Highland Community College. In 2005, he was named "State Teacher of the Year" by the Illinois Community College Board of Trustees. Johnson has also received a National Endowment for the Arts fellowship for his translation of Bolivian poet Jaime Saenz's The Night. David Koepsell (Foreword) is an author, philosopher, attorney, and educator whose recent research focuses on the nexus of science, technology, ethics, and public policy. He teaches at the Delft University of Technology, and lives in The Netherlands. He has provided commentary regarding ethics, society, religion, and technology on: MSNBC, Fox News Channel, The Guardian, The Washington Times, NPR Radio, Radio Free Europe, Air America, The Atlanta Journal Constitution, and the Associated Press, among others. His PhD in Philosophy and J.D. in Law are from University at Buffalo. Eric Lorberer (Preface) holds a B.A. in English Literature and Humanities from Washington College and an M.F.A. in Creative Writing from the University of Massachusetts, Amherst. He has published poems, essays, and criticism in numerous magazines and has been awarded a SASE/Jerome Fellowship for his writing. As the editor of Rain Taxi Review of Books, he is responsible for the voice and style that has brought the magazine widespread acclaim. Lorberer also is the director of the Twin Cities Book Festival, has served as a panelist for the National Endowment for the Arts, and speaks at conferences and literary festivals around the country as an advocate for independent publishing and literary culture. Jeremy Noel-Tod (Afterword) is a Lecturer at University of East Anglia in England. He has a B.A. English Literature from University of Oxford and a Ph.D. in English Literature from University of Cambridge. He is a poet, reviewer, and author. In 2004, he presented a BBC Radio 3 documentary on the medieval poem, Sir Gawain and the Green Knight. He reviews poetry for the Times Literary Supplement and the Daily Telegraph, and contributes articles to the periodical Slightly Foxed. His own poetry has appeared in the magazine Painted, spoken and Other Men's Flowers, a collection of contemporary parodies edited by Ron Paste. In 2004, he founded Landfill, a poetry pamphlet press, and in 2008 became an Associate Editor of Eggbox Publishing. Joshua Kotin (Afterword) is an Assistant Professor of English at Princeton University. He received his PhD from the Department of English Language and Literature at the University of Chicago in 2011. From 2005 to 2008, he was editor of the literary journal Chicago Review. Ted Pelton (Editor) is a Professor of Humanities at Medaille College of Buffalo, NY, and author of four fiction titles. He has received National Endowment for the Arts and Isherwood fellowships for fiction. He founded and is the Publisher of Starcherone Books.