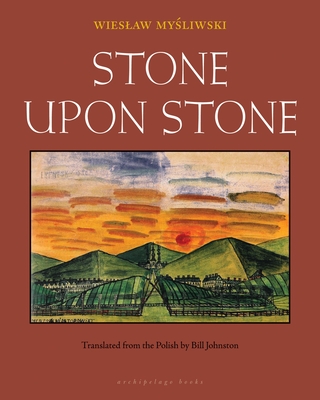 Winner of the PEN Translation Prize

A “sweeping . . . irreverent” masterpiece of postwar Polish literature that “chronicles the modernization of Poland and celebrates the persistence of desire” (The New Yorker)

Hailed as one of the best ever books in translation, Stone Upon Stone is Wieslaw Mysliwski’s grand epic in the rural tradition—a profound and irreverent stream of memory cutting through the rich and varied terrain of one man’s connection to the land, to his family and community, to women, to tradition, to God, to death, and to what it means to be alive. Wise and impetuous, plainspoken and compassionate, Szymek recalls his youth in their village, his time as a guerrilla soldier, as a wedding official, barber, policeman, lover, drinker, and caretaker for his invalid brother.

Filled with interwoven stories and voices, by turns hilarious and moving, Szymek’s narrative exudes the profound wisdom of one who has suffered, yet who loves life to the very core.

Wieslaw Mysliwski is the only writer to have twice received the Nike Prize, Poland's most prestigious literary award: in 1997 for his novel Horizon and again in 2007 for A Treatise on Shelling Beans. He worked as an editor at the People's Publishing Cooperative and at the magazines Regiony and Sycyna. In addition to the Nike Prize, Wieslaw Mysliwski has received the Stanislaw Pietak Prize, The Reymont Prize, and The Alfred Jurzykowski Foundation Award. Stone Upon Stone is widely regarded as his crowning achievement. Bill Johnston is the Chair of the Comparative Literature Department at Indiana University. His translations include Wieslaw Mysliwski's Stone Upon Stone, and Magdalens Tulli's Dreams and Stones, Moving Parts, Flaw and In Red. His 2008 translation of Tadeusz Rózewicz's new poems won the inaugural Found in Translation Prize and was shortlisted for the National Book Critics Circle Poetry Award.


"This is an epic novel about modernization in rural Poland." — Publisher's Weekly, 20 Best Books in Translation You've Never Read

Joyously anchored in the physical world, steeped in storytelling, a delight from start to finish. — Kirkus, starred review

Wieslaw Mysliwski's vast novel is an artistic accomplishment of the highest order… A masterpiece beyond the shadow of a doubt. — Henryk Bereza

A hymn in praise of life. — Krysytna Dabrowska

A marvel of narrative seduction, a rare double masterpiece of storytelling and translation.. . . Mysliwski's prose, replete with wit and an almost casual intensity, skips nimbly from one emotional register to the next, carrying dramatic force. . . . He manages tone so finely, orchestrating a perfect continuity between the tragic and the comic and, ultimately, between life and death . . . In his translation Bill Johnston navigates Mysliwski's modulations with skill and the lightness of touch that is generally the face of profound labor. — Times Literary Supplement

A marvelous, garrulous book ... The grandest example of a genre ...  Szymek's rustic voice narrates with a naivete and an eloquence that are equally endearing, reaching into every corner of the Polish countryside like a great shining sun. — The National

Sweeping . . . irreverent . . With winning candor . . . chronicles the modernization of rural Poland and celebrates the persistence of desire. — The New Yorker

"[Myśliwski] belongs in the first rank of modern Eastern European novelists. . . . The prose ... is vividly concrete, blazing with precise physical details, and brusque (though never the less acute) even when it comes to thorny philosophical questions." — Los Angeles Review of Books