Our Lady of the Nile: A Novel (Paperback) 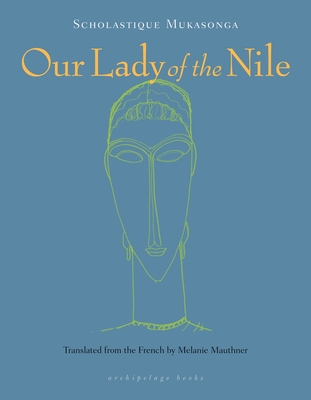 Our Lady of the Nile is a Catholic girl's boarding school drama of a higher magnitude, one that ends not only in sexual awakening and the pain of coming-of-age, but in genocide. Set in Rwanda in the lead-up to the 1994, Mukasonga's novel-in-vignettes slowly traces the fault lines that tear apart both the school and the country. I grew up reading British, French, and American boarding school novels (it's a weird sub-genre I have a lot of affection for), but never one like Our Lady of the Nile. With this novel Mukasonga engages with the colonial implications of the boarding school genre, asking us to see the parallels, the diversions, and the dangers of demonizing the least powerful.

Friendship, deceit, fear, and persecution at an elite boarding school for young women in Rwanda, fifteen years before the 1994 genocide of the Tutsi . . . “Mukasonga’s masterpiece” (Julian Lucas, NYRB)

Scholastique Mukasonga drops us into an elite Catholic boarding school for young women perched on the edge of the Nile. Parents send their daughters to Our Lady of the Nile to be molded into respectable citizens and to escape the dangers of the outside world. Fifteen years prior to the 1994 Rwandan genocide, we watch as these girls try on their parents’ preconceptions and attitudes, transforming the lycée into a microcosm of the country’s mounting racial tensions and violence. In the midst of the interminable rainy season, everything unfolds behind the closed doors of the school: friendship, curiosity, fear, deceit, prejudice, and persecution. With masterful prose that is at once subtle and penetrating, Mukasonga captures a society hurtling towards horror.

Born in Rwanda in 1956, Scholastique Mukasonga experienced from childhood the violence and humiliation of the ethnic conflicts that shook her country. In 1960, her family was displaced to the polluted and under-developed Bugesera district of Rwanda. Mukasonga was later forced to flee to Burundi. She settled in France in 1992, only two years before the brutal genocide of the Tutsi swept through Rwanda. In the aftermath, Mukasonga learned that thirty-seven of her family members had been massacred. Her first novel, Our Lady of the Nile, won the 2014 French Voices Award, the Renaudot Prize, the Ahamadou Kourouma Award, and was shortlisted for the 2016 International Dublin Literary Award. In 2017 her memoir Cockroaches was a finalist for the LA Times Christopher Isherwood Prize for Autobiographical Prose and later, the New York Times named it one of the “50 Best Memoirs of the Past 50 Years.” Jordan Stump’s translation of her memoir, The Barefoot Woman, was named a finalist for the 2019 National Book Award for Translated Literature. In 2019, In 2019, Our Lady of The Nile was adapted into a film by Atiq Rahimi. The film won the “Crystal Bear” at Berlinale 2020 and was part of the Official Selection for TIFF 2019.

Melanie Mauthner studied Modern Languages at Wadham College, Oxford and worked as a sociology lecturer before becoming a translator. Her poems and short fiction have appeared in a variety of literary magazines and anthologies. Mauthner performs as part of the London writers’ collective, Malika’s Poetry Kitchen.

A Publishers Weekly Book of the Year

Mukasonga’s formidable talent turns this novel about Rwandan girls in a Catholic high school into a masterful story about genocide, colonialism, and all the ways that the world can manipulate and destroy the aspirations of girls. This is a deeply moving exploration of human cruelties – and the stubborn hope that rests in each difficult moment. This is a book for our times.
— Maaza Mengiste, author of The Shadow King

In skillfully distilling an atrocity the reach and horror of which is hard to wrap one’s head around into the eminently relatable, recognisable tale of the lives of teenage schoolgirls, Mukasonga has written a coming-of-age story like no other.
— Lucy Scholes, The Telegraph

Mukasonga’s masterpiece . . . The novel’s electricity comes from its deceptive lightness, the danse macabre of dorm intrigue on the cusp of Armageddon.
— Julian Lucas, New York Review of Books

Eerily laconic, both comedy and tragedy hauntingly understated . . . a book about our inability or refusal to protect children from history.
— Sarah Moss, The Guardian

‘Scholastique Mukasonga has wrought pain, grief and anger into art. Our Lady of the Nile demands that we ask ourselves how and where violence begins, and offers a clear-eyed view of a world falling apart. It is an important contribution to the literature of witness to Rwanda’s agony.’
— Aminatta Forna, author of Happiness

Haunted though they are by the memory of the unspeakable atrocities visited on her family and her people, these stories by Scholastique Mukasonga breathe upon a vanished world and bring it to life in all its sparkling multifariousness.
— J.M. Coetzee on Igifu

The Barefoot Woman is simultaneously a powerful work of witness and memorial, a loving act of reconstruction, and an unflinching reckoning with the Rwandan Civil War. In sentences of great beauty and restraint, Mukasonga rescues a million souls from the collective noun 'genocide,' returning them to us as individual human beings, who lived, laughed, meddled in each other's affairs, worked, decorated their houses, raised children, told stories. An essential and powerful read.
— Zadie Smith

Radiant with love...The Barefoot Woman powerfully continues the tradition of women’s work it so lovingly recounts. In Mukasonga’s village, the women were in charge of the fire. They stoked it, kept it going all night, every night. In her work — six searing books and counting — she has become the keeper of the flame.
— Parul Sehgal, The New York Times