The Middle Kingdom: The Faerie World of Ireland (Paperback) 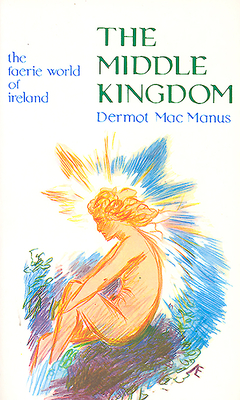 " Among the books I read at the Beaconsfield Public Library] I remember being impressed by Dermot MacManus' The Middle Kingdom, which had a great effect on me, and is probably one of the most influential books I've ever read", Terry Pratchett (in his 1999 talk to the Folklore Society)

'No matter what one doubts, ' wrote W.B.Yeats, 'one never doubts the faeries for . . . they stand to reason.' The author, an intimate friend of Yeats and a friend too of the great folklorist Douglas Hyde and the myriad-minded mystic G.W.Russell ('A.E.'), was a staunch believer in 'the ancient and continuing spirit life of the countryside'. Writing not as a folklorist but as a historian, Diarmuid MacManus records in factual detail many manifestations of the Irish faery world early in the twentieth century. He tells how the Thornhill fairy appeared to two sisters in their room, and the Mount Leinster fairy to a young woman as she was taking the cows home, and a young girl tried to pat the Wicklow pooka as it walked beside her, but her hand went right through it. This is a strikingly persuasive book, tackling in a serious and intelligent manner a subject that has a strong romantic appeal. The author set out to write the book with certain principles in mind: first, that a central character in each incident was still alive at the time the book was first published (in 1959); second, that he could vouch for their reliability; and third, that each agreed to stand up, if asked, and vouch for the truth of the experience. Except in a few instances, those telling the stories had been friends of the author for many years. Since its publication forty years ago it has retained its uniqueness as the only collection of true Irish fairy tales.