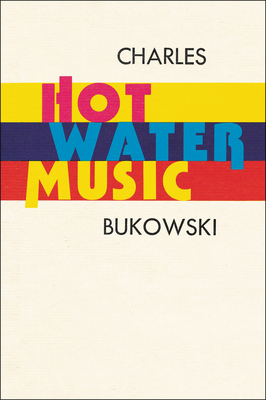 By Charles Bukowski
$16.99
On Our Shelves

With his characteristic raw and minimalist style, Charles Bukowski takes us on a walk through his side of town in Hot Water Music.  He gives us little vignettes of depravity and lasciviousness, bite sized pieces of what is both beautiful and grotesque.

The stories in Hot Water Music dash around the worst parts of town – a motel room stinking of sick, a decrepit apartment housing a perpetually arguing couple, a bar tended by a skeleton – and depict the darkest parts of human existence.  Bukowski talks simply and profoundly about the underbelly of the working class without raising judgement.

In the way he writes about sex, relationships, writing, and inebriation, Bukowski sets the bar for irreverent art – his work inhabits the basest part of the mind and the most extreme absurdity of the everyday.

Charles Bukowski is one of America’s best-known contemporary writers of poetry and prose and, many would claim, its most influential and imitated poet. He was born in 1920 in Andernach, Germany, to an American soldier father and a German mother, and brought to the United States at the age of two. He was raised in Los Angeles and lived there for over fifty years. He died in San Pedro, California, on March 9, 1994, at the age of seventy-three, shortly after completing his last novel, Pulp.

Abel Debritto, a former Fulbright scholar and current Marie Curie fellow, works in the digital humanities. He is the author of Charles Bukowski, King of the Underground, and the editor of the Bukowski collections On Writing, On Cats, and On Love.