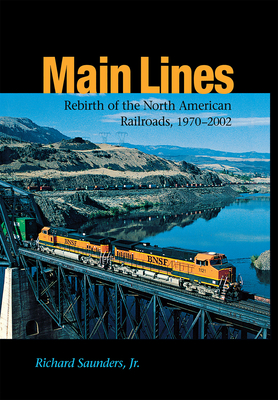 Rising from the corporate wreckage of the 1970s, when even the nation's largest railroad filed for bankruptcy, American railroads are once again a major part of the global economy. Richard Saunders brings to life this amazing story of revitalization, showing how a combination of creatively structured aid from the public sector and talented private management gave railroads new momentum. By 2002, American railroads carried five times the tonnage they hauled in their former heyday, and they did this with one-tenth of the employees.

How did this revolution happen? Saunders shows how limited, disciplined, and politically risky government intervention stabilized a sinking industry. Whatever their results for other industries, President Carter's deregulation and President Reagan's tax revisions restored the railroads' financial health. Container cars and other new technologies also helped to transform inefficient railroads into vibrant enterprises. Corporate strategies varied on the road to success, and even skilled managers encountered pitfalls, but the railroads' resurgence and growth proved to be unstoppable.

After the merger mania of the mid-twentieth century, the main U.S. railroad systems evolved into seven transregional corporate giants. Of the "Super Seven," only four survived past the 1990s—the Norfolk Southern, CSX, Union Pacific, and Burlington Northern–Santa Fe. These four set the standard at a time when no other major railroads could afford the new technologies needed to turn a profit.

"Magisterial in scope and precise in detail, Main Lines makes a significant contribution to modern railroad history and to the history of American business."
—Mark Reutter, Editor, Railroad History

"A superb source of recent US railroad history and a must read for anyone with an interest in the re-birth of the North American railroad industry."—Michigan Railfan

"An extraordinarily detailed and insightful look at the complex and profound reconfiguration of American railroads ... this work is likely to remain the standard account of how the modern rail system came into being for some time to come."—Indiana Magazine of History