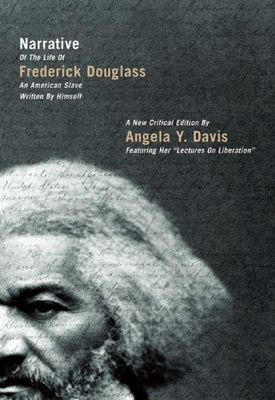 A masterpiece of African American literature, Frederick Douglass's Narrative is the powerful story of an enslaved youth coming into social and moral consciousness by disobeying his white slavemasters and secretly teaching himself to read. Achieving literacy emboldens Douglass to resist, escape and ultimately achieve his freedom. After escaping slavery, Douglass became a leader in the anti-slavery and women's rights movements, a bestselling author and U.S. diplomat.

In this new critical edition, legendary activist and feminist scholar Angela Davis sheds new light on the legacy of Frederick Douglass. In two philosophical lectures originally delivered at UCLA in autumn 1969, Davis focuses on Douglass's intellectual and spiritual awakening, and the importance of self-knowledge in achieving freedom from all forms of oppression. With detailed attention to Douglass's text, she interrogates the legacy of slavery and shares timeless lessons about oppression, resistance and freedom. And in an extended introductory essay written for this edition, Davis comments on previous editions of the Narrative and re-examines Douglass through a contemporary feminist perspective. An important new edition of an American classic.

"Angela Y. Davis presents a long overdue examination of Douglass' work not just from the perspective of a woman but one of the most provocative and profound minds of the last half century. It is my sincere hope that this City Lights edition of The Narrative will inspire researchers and individuals to take a closer look at the tremendous degree of influence Anna Murray Douglass had in the life and the career of her husband and my great-great-great grandfather."--Kenneth B. Morris, Jr., Great-great-great grandson of Frederick Douglass and Great-great grandson of Booker T. Washington

"Davis' arguments for justice are formidable . . . The power of her historical insights and the sweetness of her dream cannot be denied."--New York Times Book Review

"Long before 'race/gender' became the obligatory injunction it is now, Angela Davis was developing an analytical framework that brought all of these factors into play. For readers who only see Angela Davis as a public icon . . . meet the real Angela Davis: perhaps the leading public intellectual of our era."--Robin D. G. Kelley author of Thelonious Monk: The Life and Times of an American Original

"There was a time in America when to call a person an 'abolitionist' was the ultimate epithet. It evoked scorn in the North and outrage in the South. Yet they were the harbingers of things to come. They were on the right side of history. Prof. Angela Y. Davis stands in that proud, radical tradition."--Mumia Abu-Jamal, author of Jailhouse Lawyers: Prisoners Defending Prisoners v. the U.S.A.

"Behold the heart and mind of Angela Davis, open, relentless, and on time "--June Jordan

"The enormous revolution in Black consciousness which has occurred in your generation, my dear sister, means the beginning or the end of America. Some of us, white and Black, know how great a price has already been paid to bring into existence a new consciousness, a new people in an unprecedented nation. If we know, and do nothing, we are worse than the murderers hired in our name. If we know, then we must fight for your life as though it were our own--which it is--and render impassable with our bodies the corridor to the gas chamber. For, if they take you in the morning, they will be coming for us that night."--James Baldwin

American abolitionist, women's suffragist, author, statesman and reformer, Douglass is one of the most prominent figures in African-American history and U.S. history. His Narrative is a cornerstone of African-American literature. Internationally renowned public speaker, author, activist, scholar and symbol of 1970s black power, Davis was the third woman to appear on the FBI's "Most Wanted" list and has authored eight books.