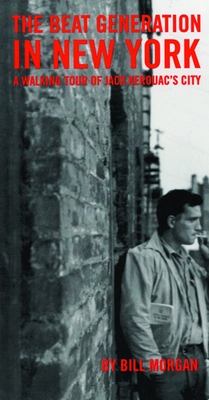 Set off on the eternal trail of the Beat experience in the city that inspired many of Jack Kerouac's best-loved novels including On the Road, Vanity of Duluoz, The Town and the City, and Desolation Angels. This is the ultimate guide to Kerouac's New York, packed with photos of the Beat Generation and filled with undercover information and little-known anecdotes.

The Chelsea-district apartment where Jack wrote On the Road.

Times Square, a magnet for Kerouac and the Beats.

Columbia University, where the original Beats first met and began a revolution in American literature and culture.

Each tour includes a map of the neighborhood, subway and bus information, and an insider's angle on Jack Kerouac's life in New York. A must for Beat enthusiasts and critics.

Bill Morgan is a painter and archival consultant working in New York City. His previous publications include The Works of Allen Ginsberg 1941-1994: A Descriptive Bibliography and Lawrence Ferlinghetti: A Comprehensive Bibliography. He has worked as an archivist for Allen Ginsberg, Abbie Hoffman, and Timothy Leary.