Blood Will Out: The True Story of a Murder, a Mystery, and a Masquerade (Hardcover) 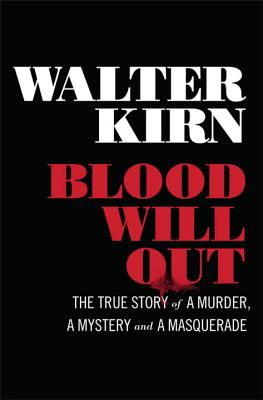 “More memoir than true crime tell-all, Blood Will Out parses the convoluted relationship between writer Kirn and his Rockefeller friend, Clark, who turns out not to be a Rockefeller at all; instead, he's a serial impostor, a murderous sociopath, and a con man of the highest order. Kirn unflinchingly reveals his own ambition, desperation, and fixation with wealth and social status that derail his shrewd writer's instinct and allow him to be bamboozled, even as Clark's mask slips. A blistering character study of both murderer and writer, Blood Will Out sounds an alarm about the way our own flaws compel us to see what we most desire to see and the grave danger that might put us in.”
— Susan Gusho, Watermark Books, Wichita, KS

An In Cold Blood for our time, a chilling, compulsive story of a writer unwittingly caught in the wake of a grifter-turned-murderer.

In the summer of 1998, Walter Kirn—then an aspiring novelist struggling with impending fatherhood and a dissolving marriage—set out on a peculiar, fateful errand: to personally deliver a crippled hunting dog from his home in Montana to the New York apartment of one Clark Rockefeller, a secretive young banker and art collector who had adopted the dog over the Internet. Thus began a fifteen-year relationship that drew Kirn deep into the fun-house world of an outlandish, eccentric son of privilege who ultimately would be unmasked as a brazen serial impostor, child kidnapper, and brutal murderer.


Kirn's one-of-a-kind story of being duped by a real-life Mr. Ripley takes us on a bizarre and haunting journey from the posh private clubrooms of Manhattan to the hard-boiled courtrooms and prisons of Los Angeles. As Kirn uncovers the truth about his friend, a psychopath masquerading as a gentleman, he also confronts hard truths about himself. Why, as a writer of fiction, was he susceptible to the deception of a sinister fantasist whose crimes, Kirn learns, were based on books and movies? What are the hidden psychological links between the artist and the con man? To answer these and other questions, Kirn attends his old friend’s murder trial and uses it as an occasion to reflect on both their tangled personal relationship and the surprising literary sources of Rockefeller's evil. This investigation of the past climaxes in a tense jailhouse reunion with a man whom Kirn realizes he barely knew—a predatory, sophisticated genius whose life, in some respects, parallels his own and who may have intended to take another victim during his years as a fugitive from justice: Kirn himself.

Combining confessional memoir, true crime reporting, and cultural speculation, Blood Will Out is a Dreiser-esque tale of self-invention, upward mobility, and intellectual arrogance. It exposes the layers of longing and corruption, ambition and self-delusion beneath the Great American con.

Walter Kirn is the author of Thumbsucker and Up in the Air, both made into major films. His work has appeared in GQ, New York, Esquire, and the New York Times Magazine.

Kirn is such a good writer and Gerhartsreiter such a baroquely, demonically colorful subject, you could imagine this being a fine read had they no personal connection. That they did, however, elevates Blood Will Out to another level: Kirn lards his story with detail while reviewing his own psyche, in an attempt to discover how he—a journalist!—could have been so fooled. The irony? With all due respect to Kirn's skills as a novelist, it is hard to conceive of any fictionalized version of 'Clark Rockefeller' being as compelling as the real thing.

This stunning book dissects psychopathy, the perverse manners of the Internet generation, art, money, and the very nature of belief. At its core, it brilliantly portrays one man's journey through fraudulence to a point of stern resolve. It's tabloid tell-all journalism and Old Testament rebuke. It is of a piece with Roethke: it tells us that the abyss is just a step down the stair.
— James Ellroy

In this smart, real-life psychological thriller, the fake Rockefeller is a zombie Gatsby and Kirn the post-apocalyptic Fitzgerald.
— Nina Burleigh - The New York Times Book Review

In Blood Will Out Walter Kirn brilliantly and with remarkable eloquence dissects one of the great impostors—and along the way delves into the fraudulence within that made him so susceptible to the other man's lies. A gripping performance!

Though Blood Will Out is written with Walter Kirn's usual stylistic verve, insight, and imagination it is actually a disturbing account of a one-sided, naively misguided 'friendship' with a dangerous sociopath. Here is a memoir in the guise of a 'true crime story'—a double portrait of writer and subject in which the subject is partially erased even as the writer evokes the considerable tools of his imagination to reconstruct him and his own motive in the bizarre relationship.

A Hitchcockian psychological thriller and one of the most honest and affecting memoirs I've read. It is superbly written, each sentence a wonder, each page deepening my appreciation of Kirn’s precise observation of human nature.
— Amy Tan

Blood Will Out is a deep meditation on wealth and class and anybody's self-destructive ability to get conned by a blackbelt liar. A must-read.

This scorching account of a friendship with a man who overturned the author's faith in his own judgment owes its strength to the author's deep understanding of 'the fathomless human genius for credulity, wishful thinking, and self deception,' starting with his own. Kirn parses the ways in which a highly intelligent writer got caught up with a character more compelling than any he could create, such that this book has the power and insight and raw energy of an instant classic.
— Amy Hempel

There is no finer guide to the American berserk than Walter Kirn.
— Gary Shteyngart

The parallels with Patricia Highsmith’s The Talented Mr. Ripley are not lost on Kirn, who spends as much time trying to understand how he and others fell under Gerhartstreiter’s spell as he does relating the primary tale of the criminal himself. Kirn’s candor, ear for dialogue, and crisp prose make for a masterful true crime narrative that is impossible to put down. The book deserves to become a classic.

This fascinating account from the perspective of a victim should appeal to readers of memoirs and true crime titles.
— Deirdre Bray - Library Journal

Kirn bravely lays bare his own vanities and follies in this heart-pounding true tale; he examines the hold of fiction on the human imagination—how we live for it and occasionally die for it, too.
— Judith Newman - More Magazine

The story of Blood Will Out is one of cosmic ironies and jaw-dropping reversals… What makes Blood Will Out so absorbing is its teller more than its subject. Kirn’s persona is captivating—funny, pissed off, highly literate, and self-searching. He’s also an elegant, classic writer… Add the highly readable, intricately told Blood Will Out to the list of great books about the dizzying tensions of the writing life and the maddening difficulty of getting at the truth.

[A] fascinating account of the imposter he considered his friend for 10 years… Blood Will Out is an exploration of a hoaxer from the point of view of a mark, and of a relationship based on interlocking deceptions and self-deceptions. The result is a moral tale about the dangers of social climbing on a rickety ladder—for both those trying to scramble up the rungs and those trying to hold it steady below.

Riveting and disturbing, Blood Will Out is a mélange of memoir, stranger-than-fiction crime reporting and cultural critique. The literary markers run the gamut from James Ellroy’s My Dark Places, and Fyodor Doestoevsky’s Crime and Punishment to Patricia Highsmith’s Ripley trilogy and Strangers on a Train. Kirn’s self-lacerating meditations on class, art, vanity, ambition, betrayal and delusion elevate the material beyond its pulpy core… Kirn’s belated acceptance of reality provides the most fascinating and frustrating element of this engaging, self-flagellating memoir.

One of the most honest, compelling and strangest books about the relationship between a writer and his subject ever penned by an American scribe… Each new revelation comes subtly, and each adds to the pathetic and creepy portrait of Clark Rockefeller as a vacuous manipulator… The ending of Blood Will Out is at once deeply ambiguous and deeply satisfying. By then, Kirn has looked into the eyes of a cruel, empty man—and learned a lot about himself in the process.

Kirn's voice throughout is witty and sharp. His canny, deceptively casual organization of the narrative heightens suspense, and the words and images in his flowing prose cut like laser beams… For its devastating, unsettling psychological insights and its rich, polished writing, Blood Will Out equals Truman Capote's In Cold Blood as a nonfiction novel of crime.

Blood Will Out…makes the darkness visible. Kirn’s account of his friendship with this strange and terrible man cuts through the frippery of Gerhartsreiter’s outrageous affectations to reveal the Lovecraftian nightmare hiding beneath the J. Press blazer. Blood Will Out is a wise, deeply frightening, and potentially sleep-disrupting read… In the end, Kirn manages to transform his personal account of one of this century’s most aberrant personalities into a vessel bearing universal truths about narrative, evil, and the American Dream itself.

Absorbing… If there’s anything rarer than a con man with Clark’s gift for the game, it’s a writer of Kirn’s quicksilver accomplishment… To have someone of Kirn’s ability write about the case from the inside promises exceptional insight into the way such tricksters operate and the even greater enigma of what motivates them.
— Laura Miller - Salon.com

One of the most honest, compelling and strangest books about the relationship between a writer and his subject ever penned by an American scribe— Each new revelation comes subtly, and each adds to the pathetic and creepy portrait of Clark Rockefeller as a vacuous manipulator— The ending of Blood Will Out is at once deeply ambiguous and deeply satisfying. By then, Kirn has looked into the eyes of a cruel, empty man—and learned a lot about himself in the process.

Engrossing… A haunting, pained and terrifically engaging self-interrogation… That's what makes great memoirs—which this one is—so interesting: They're at once authentic and performative. They're not all that different in that respect from the act of an impostor and murderer such as Gerhartsreiter, missing only the essential ingredient of madness… It's a major step forward as a writer.
— Charles Finch - Chicago Tribune

A nod to a different canon of con men and tricksters: the protagonist of Melville’s The Confidence-Man, the prep-school clones of Leopold and Loeb of Hitchcock’s Rope, and Highsmith’s highbrow hucksters—all crossed with the shadows of film noir.