The Drowned World: A Novel (Paperback) 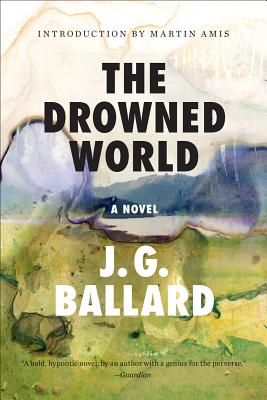 A thrilling adventure with “an oppressive power reminiscent of Conrad” (Kingsley Amis), considered by many to be Ballard’s finest.

In the novel that catapulted him to international acclaim upon its publication in 1962, J.G. Ballard’s mesmerizing and ferociously prescient The Drowned World imagines a terrifying future in which solar radiation and global warming has melted the ice caps, and Triassic-era jungles have overrun a submerged and tropical London. Set during the year 2145, the novel follows biologist Dr. Robert Kerans and his team of scientists as they confront a surreal cityscape populated by giant iguanas, albino alligators, and endless swarms of malarial insects. Nature has swallowed all but a few remnants of human civilization, and slowly, Kearns and his companions are transformed—both physically and psychologically—by this prehistoric environment. The Drowned World is both a thrilling adventure and haunting examination of the effects of environmental collapse on the human mind.

J.G. Ballard was born in Shanghai in 1930 and lived in England from 1946 until his death in London in 2009. He is the author of nineteen novels, including Empire of the Sun, The Drought, and Crash, with many of them made into major films.

Martin Amis is one of Britain's most prolific post-war writers and a professor of creative writing at the University of Manchester. His stories and essays explore the absurdity of the postmodern condition.

This tale of strange and terrible adventure in a world of steaming jungles has an oppressive power reminiscent of Conrad.
— Kingsley Amis

A bold, hypnotic novel, by an author with a genius for the perverse.
— Guardian

The Drowned World ought to be recognized as one of the pioneering works of climate fiction…Writing during the era we believed most fervently that the world was ours to mold and shape, Ballard warned us that it wasn’t.

[The Drowned World] laid the groundwork for generations of climate-change fiction to come.