Foreign Devils on the Silk Road: The Search for the Lost Cities and Treasures of Chinese Central Asia (Paperback) 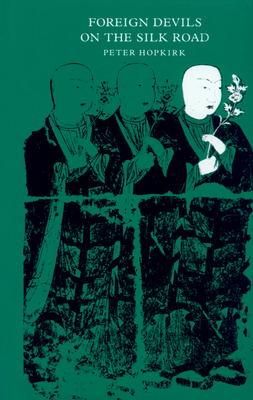 The Silk Road, which linked imperial Rome and distant China, was once the greatest thoroughfare on earth. Along it traveled precious cargoes of silk, gold and ivory, as well as revolutionary new ideas. Its oasis towns blossomed into thriving centers of Buddhist art and learning. In time it began to decline. The traffic slowed, the merchants left and finally its towns vanished beneath the desert sands to be forgotten for a thousand years; however, legends grew up of lost cities filled with treasures and guarded by demons. In the early years of the last century foreign explorers began to investigate these legends, and very soon an international race began for the art treasures of the Silk Road. Huge wall paintings, sculptures and priceless manuscripts were carried away, literally by the ton, and are today scattered through the museums of a dozen countries. Peter Hopkirk tells the story of the intrepid men who, at great personal risk, led these long-range archaeological raids, incurring the undying wrath of the Chinese.

For five years Chief Reporter of the London Times, Peter Hopkirk now specializes in Middle Eastern and Asiatic affairs, He has traveled widely throughout the world during his twenty-seven years as a reporter and foreign correspondent.

"The story of what this handful of dauntless men from different modern countries endured in order to procure some fragments of Central Asia's lost culture for the museums of their own or an adopted land is told in great style. . . . It is a series of interwoven accounts of high adventure, high stakes, spies, loyalty, treachery, forgery, greed, and occasional magnanimity. It celebrates courage, vision, dedication, and will. Hopkirk has a remarkable cast of characters with whom to work. . . . Every story he touches is totally engrossing."—Washington Post

"Foreign Devils on the Silk Road will be useful to those seeking a general knowledge of the subject, as well as to those possessing more specific knowledge who require a painless glance at the whole canvas. while some parts of Foreign Devils are well known, others are not. Hopkirk skillfully blends the parts into an engaging whole. I recommend saving the book for a long evening before the fire."—Central Asian Survey