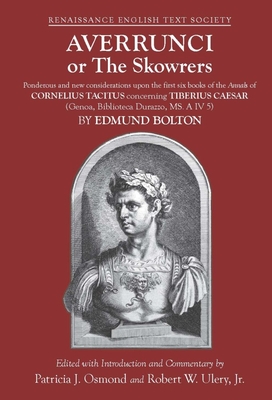 This edition makes available for the first time a recently discovered and provocative work by the English historian Edmund Bolton. Composed in the years 1629–1634, Averrunci or The Skowrers aims at exposing Tacitus’ (alleged) anti-monarchical bias in Annals 1–6 and at rehabilitating the character and reign of the emperor Tiberius. The Introduction discusses the manuscript in the context of Bolton’s life and other works, its response to political and historiographical controversies in early Stuart England, and its unusual, revisionist position in the contemporary movement of Tacitism. A Commentary, following the text, explains difficult passages and identifies Bolton’s extensive historical references.

Patricia Osmond (B.A., Sarah Lawrence College; Dott. in Lettere, Università di Roma; Ph.D., Bryn Mawr College, Roman and Early Modern History) has taught for and directed American university programs in Rome, including the College of Design program of Iowa State University. Her work focuses on the reception of Sallust and other Roman historians in the Renaissance.

Robert Ulery was born and raised in Goshen, Indiana, educated there and at Yale University (B.A. 1966 in Classics [Latin], M.A. 1968 in Classics, Ph.D. 1971 in Classics, with a dissertation on the Renaissance manuscripts of Tacitus, including a year of study in Italy). He taught Latin and Greek and classical literature for 40 years at Wake Forest University.