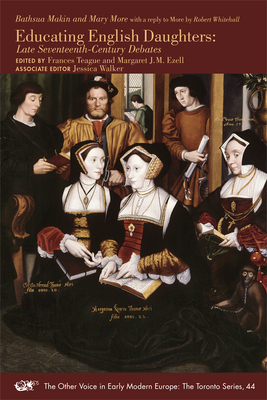 This edition offers texts from Bathsua Makin and Mary More, and Robert Whitehall’s response to More’s argument. Makin describes the appropriate education for London merchants’ daughters, arguing that girls should be educated and should aspire to follow learned women in history, and that educated women improve their families and themselves. More argues that women have the right to an education, and that such an education shows that the inequality of married women under English law is a man-made institution. More’s argument drew objections from her Oxford reader, Robert Whitehall, who preserved her manuscript with his own. Makin and More enjoyed a measure of public recognition and esteem, yet after their deaths, they and their texts were largely ignored until the late twentieth century.

Frances Teague is University Professor and Josiah Meigs Professor, Departments of English and of Theatre and Film Studies, at the University of Georgia.


Margaret J. M. Ezell is Distinguished Professor of English and holder of the John and Sara Lindsey Chair of Liberal Arts at Texas A&M University. She is the author of The Patriarch’s Wife: Literary Evidence and the History of the Family (1987), Writing Women’s Literary History (1993), and Social Authorship and the Advent of Print (1999), as well as numerous articles and chapters investigating the social circulation of handwritten texts.

Mary More and Bathsua Makin wrote essays on female education that circulated in manuscript and print in the seventeenth century. This edition, lightly modernized and with substantial, rigorous introductions and useful notes, makes these two important texts — and a third by Robert Whitehall written in response to More — more accessible to contemporary readers. The volume is compelling reading and will be an important resource for those interested in the seventeenth-century querelle des femmes, women’s education, humanist learning, and the history of feminist thought.