An Oresteia: Agamemnon by Aiskhylos; Elektra by Sophokles; Orestes by Euripides (Paperback) 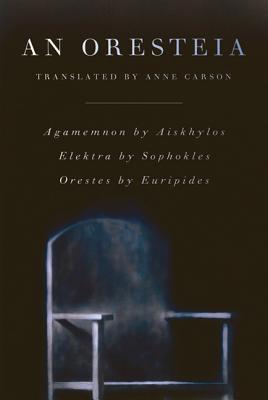 In An Oresteia, the classicist Anne Carson combines three different versions of the tragedy of the house of Atreus — A iskhylos' Agamemnon, Sophokles' Elektra and Euripides' Orestes. After the murder of her daughter Iphigeneia by her husband, Agamemnon, Klytaimestra exacts a mother's revenge, murdering Agamemnon and his mistress, Kassandra. Displeased with Klytaimestra's actions, Apollo calls on her son, Orestes, to avenge his father's death with the help of his sister Elektra. In the end, Orestes is driven mad by the Furies for his bloody betrayal of family. Condemned to death by the people of Argos, he and Elektra must justify their actions — or flout society, justice and the gods.

Carson's translation combines contemporary language with the traditional structures and rhetoric of Greek tragedy, opening up this ancient tale of vengeance to a modern audience and revealing the essential wit and morbidity of the original plays.

Anne Carson is a professor of Classics at the University of Toronto, Canada, as well as a poet, essayist, and translator. She was a Guggenheim Fellow and a MacArthur Fellow, and has won a Pushcart Prize, a Lannan Literary Award, and a PEN Award for Poetry in Translation. Carson's first book, Eros the Bittersweet, was named one of the 100 best nonfiction books of all time by the Modern Library. Her other works include Autobiography of Red: A Novel in Verse, The Beauty of the Husband: A Fictional Essay in 29 Tangos, and Decreation: Poetry, Essays, Opera.

Aeschylus (525-456 BC) The father of Greek tragic drama, usually considered the first great writer in the Western theatrical tradition. Only seven plays, of over 70 known titles, are extant. These are The Persians (472 BC), Seven Against Thebes (469 BC), Prometheus Bound (c. 460 BC), The Suppliant Women (c. 460 BC), and the Oresteia trilogy (458 BC), comprising Agamemnon, Choephoroi, and Eumenides. He also wrote numerous satyr plays, which have only survived in fragmentary form. Aeschylus's work is powerful and operatic, using majestic but often innovative language. His attitude to Greek society and religion was generally conservative, although he boldly depicted the sufferings of men and woman when moral systems, and the gods themselves, are in conflict. Legend says he was killed by a tortoise dropped by an eagle (to break the shell) on his bald head (mistaken for a stone). His tombstone makes no mention of his literary works, referring only to his service at the Battle of Marathon (490 BC).

Sophocles (496-406 BC) was one of the three great tragic playwrights of ancient Greece; he wrote 123 plays during a career of 60 years and was still writing at the age of 90. Only seven tragedies survive, of which the most famous is Oedipus Rex.

One of the greatest and most influential of the Greek tragedians, Euripides, is said to have produced 92 plays, the first of which appeared in 455BC.