Pay No Heed to the Rockets: Palestine in the Present Tense (Paperback) 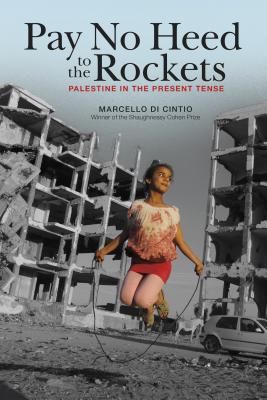 By Marcello Di Cintio
$22.95
This book is out of stock indefinitely, unable to order at this time.

Marcello Di Cintio first visited Palestine in 1999. Like most outsiders, the Palestinian narrative that he knew had been simplified by a seemingly unending struggle, a near-Sisyphean curse of stories of oppression, exile, and occupation told over and over again.

In Pay No Heed to the Rockets, he reveals a more complex story, the Palestinian experience as seen through the lens of authors, books, and literature. Using the form of a political-literary travelogue, he explores what literature means to modern Palestinians and how Palestinians make sense of the conflict between a rich imaginative life and the daily tedium and violence of survival.

Di Cintio begins his journey on the Allenby Bridge that links Jordan to Palestine. He visits the towns and villages of the West Bank, passes into Jerusalem, and then travels through Israel before crossing into Gaza. En route, he meets with poets, authors, librarians, and booksellers. He begins to see Palestine thorugh their eyes, through the stories of their stories.

In the company of literary giants like Mahmoud Darwish and Ghassan Kanafani and the contemporary authors whom they continue to inspire, Di Cintio travels thorugh the rich cultural and literary heritage of Palestine. It's there that he uncovers a humanity, and a beauty, often unnoticed by news media. At the seventieth anniversary of the Arab-Israeli War, Pay No Heed to the Rockets tells a fresh story about Palestine, one that begins with art rather than war.