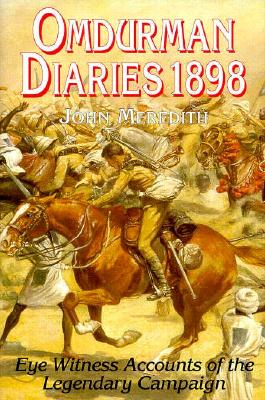 By John Meredith
Unavailable, our apologies.
Out of Print

The British campaign in the Sudan of 1898 has become one of the greatest legends of the colonial era. The famous novel and film The Four Feathers is set during the campaign, and the culminating battle at Omdurman saw the Charge of the 21st Lancers, one of the most famous actions in the history of the British Army.

A number of books will be released or re-released in 1998 for the hundredth anniversary of the campaign. Most of these will be based on the observations of senior officers and famous journalists or the recollections of Winston Churchill (who was with the 21st Lancers). Omdurman takes an entirely different approach. The war is seen through the eyes of several ordinary soldiers who left records of their service during the campaign.

Soldiers of the Lincolns, Warwicks and Royal Army Medical Corps describe the desperate battles of the campaign, as well as the day-to-day routine of a soldier's life. An officer of the Lincolns gives further details of an officer's life during the campaign. The Mahdist revolt in the Sudan was an early example of a Muslim jihad, and the ensuing campaign was one of the most colorful in military history. The outcome hung in the balance as the Mahdi's successor the Khalifa mustered an army of the various Sudanese tribes with their native weapons in an attempt to overpower Kitchener's army of Britons and Egyptians by sheer numbers.