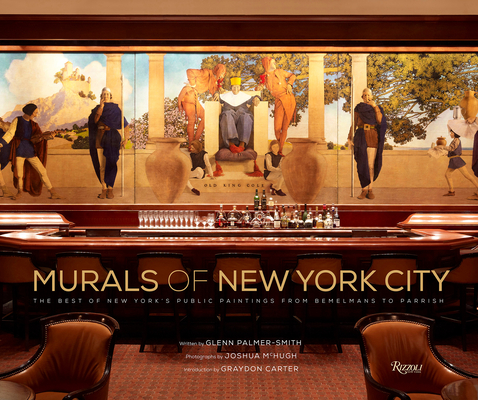 If all of the murals of New York City were under one roof, it would be the greatest collection of populist art in America. MURALS OF NEW YORK CITY is the first book to curate over thirty of the most important, influential, and impressive murals found within all five boroughs. The murals featured in this volume act as both an artistic and cultural guide to New York and its citizens over the past 100+ years—from the Victorian sensibilities of the 1900’s, to the New Deal outlook of the WPA-commissioned artworks, to the graffiti-inflected art of Keith Haring and Barry McGee.  The book enlightens readers with the lively back stories of those who commissioned and created these murals, and documents the works through extensive original photography that shows both the murals in context, and with details that highlight the artistic hand of the muralists.

From courthouses, to libraries, to schoolrooms, to classic hotel watering holes, MURALS OF NEW YORK CITY introduces readers to a wide range of cultural icons and artistic treasures. Full-color images of works by the world's most celebrated artists including Marc Chagall, Roy Lichtenstein, Maxfield Parrish, and more are accompanied by informative and historical commentary. MURALS OF NEW YORK CITY is perfect for art and architecture lovers and serves as a resource for New Yorkers, and a souvenir for the millions of tourists who visit the city every year. The book contains addresses and historical information on each mural, artist, and location, including the circumstances in which they were created, restored, and preserved.

New York-based Glenn Palmer-Smith’s career has spanned from being a Paris fashion photographer to photographer’s representative to muralist, having restored the famed Bemelmans Bar and Café Carlyle murals at the Hotel Carlyle. His work has been written about in The New Yorker, The New York Times, and Forbes. Most recently he has finished the first in a series of murals for the Christopher Newport University in Virginia. Joshua McHugh is a New York-based photographer who specializes in interior, architecture, and design related projects.  He is a Contributing Photographer at Architectural Digest, and his images are regularly published in other national shelter magazines including Elle Décor, Interior Design, and House Beautiful. Graydon Carter is the Editor of Vanity Fair.

"If you've missed the experience of walking around New York, stepping into a lobby you've never seen before, or relaxing at a bar just to soak up the atmosphere, you can always take an armchair tour. The handsome book Murals of New York City (Rizzoli) offers a look at some of NYC's most impressive large-scale artworks—the paintings that make a building's interior one of a kind."
—ROCKEFELLER CENTER BLOG

“Murals that range in style from graffiti to trompe-l’oeil punctuate the New York experience. Independently, the works are cosmetic, decorative—but together, they offer a narrative of the city and its history.” ~Quest Magazine

"Walls in New York sometimes do more than divide space. A few of them are also pages of the city’s history writ large — testament to the shifting civic vision of generations of New Yorkers. In Murals of New York City: The Best of New York’s Public Paintings From Bemelmans to Parrish, which features more than 30 large-scale works around the city, the muralist Glenn Palmer-Smith and the photographer Joshua McHugh tutor natives and tourists alike in how these walls — and a few ceilings — can best be appreciated." ~The New York Times

"Harried New Yorkers rarely stop and gaze at the murals incorporated into the city's landscape--much less understand the quirky stories and ego clashes that let to the creation of many of them. Artist Glenn Palmer-Smith is trying to change that...accompanied by essays which usually describe moments of conflice and drama in the murals' creation and life span." -WSJ

“Glen Palmer-Smith tells the amazing stories behind many of the city’s iconic works of public art. With works ranging from Orozco to Keith Haring, the book and its photography capture the works of art still setting the mood long after their initial introduction.” ~The Daily Beast

“Murals is the first book to curate over thirty of the most important, influential, and impressive murals found within all five boroughs. The murals featured in this volume act as both an artistic and cultural guide to New York and its citizens over the past 100+years…perfect for art and architecture lovers…” ~ArtDaily

“Murals of New York City presents around 30 notable murals in the City, giving us another reason to get out to explore the world outside our door.” ~Modern Sybarite

“Murals of New York in both its transfixing pictures and its fluent text, decisively captures the vibrancy of this still-wondrous city’s under-acknowledged public art.” ~HuffPost

“They tour us through five boroughs via century or more of remarkable public art. They [Palmer-Smith and McHugh] show us fresh the beloved and familiar…Thanks to them, we discover our crazy metropolis and learn its patchwork history of strivers and achievers all over again. Lucky us.” ~New York Spaces

“In a city where there’s always something new, it’s a welcome treat to discover novelty in the past.” ~Architectural Digest