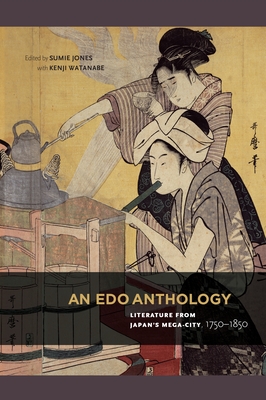 By Sumie Jones (Editor), Kenji Watanabe (Editor), Faith Bach (Contribution by)
Unavailable, our apologies.
Sorry, We Can Not Obtain this Book at This Time

During the eighteenth century, Edo (today's Tokyo) became the world's largest city, quickly surpassing London and Paris. Its rapidly expanding population and flourishing economy encouraged the development of a thriving popular culture. Innovative and ambitious young authors and artists soon began to look beyond the established categories of poetry, drama, and prose, banding together to invent completely new literary forms that focused on the fun and charm of Edo. Their writings were sometimes witty, wild, and bawdy, and other times sensitive, wise, and polished. Now some of these high spirited works, celebrating the rapid changes, extraordinary events, and scandalous news of the day, have been collected in an accessible volume highlighting the city life of Edo.

Edo's urban consumers demanded visual presentations and performances in all genres. Novelties such as books with text and art on the same page were highly sought after, as were kabuki plays and the polychrome prints that often shared the same themes, characters, and even jokes. Popular interest in sex and entertainment focused attention on the theatre district and "pleasure quarters," which became the chief backdrops for the literature and arts of the period. Gesaku, or "playful writing," invented in the mid-eighteenth century, satirized the government and samurai behavior while parodying the classics. These entertaining new styles bred genres that appealed to the masses. Among the bestsellers were lengthy serialized heroic epics, revenge dramas, ghost and monster stories, romantic melodramas, and comedies that featured common folk. An Edo Anthology offers distinctive and engaging examples of this broad range of genres and media. It includes both well-known masterpieces and unusual examples from the city's counterculture, some popular with intellectuals, others with wider appeal. Some of the translations presented here are the first available in English and many are based on first editions. In bringing together these important and expertly translated Edo texts in a single volume, this collection will be warmly welcomed by students and interested readers of Japanese literature and popular culture.