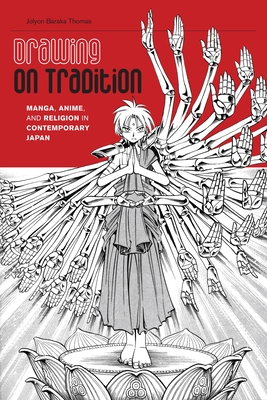 By Jolyon Baraka Thomas
Unavailable, our apologies.
Sorry, We Can Not Obtain this Book at This Time

Manga and anime (illustrated serial novels and animated films) are highly influential Japanese entertainment media that boast tremendous domestic consumption as well as worldwide distribution and an international audience. Drawing on Tradition examines religious aspects of the culture of manga and anime production and consumption through a methodological synthesis of narrative and visual analysis, history, and ethnography. Rather than merely describing the incidence of religions such as Buddhism or Shinto in these media, Jolyon Baraka Thomas shows that authors and audiences create and re-create "religious frames of mind" through their imaginative and ritualized interactions with illustrated worlds. Manga and anime therefore not only contribute to familiarity with traditional religious doctrines and imagery, but also allow authors, directors, and audiences to modify and elaborate upon such traditional tropes, sometimes creating hitherto unforeseen religious ideas and practices.

The book takes play seriously by highlighting these recursive relationships between recreation and religion, emphasizing throughout the double sense of play as entertainment and play as adulteration (i.e., the whimsical or parodic representation of religious figures, doctrines, and imagery). Building on recent developments in academic studies of manga and anime--as well as on recent advances in the study of religion as related to art and film--Thomas demonstrates that the specific aesthetic qualities and industrial dispositions of manga and anime invite practices of rendition and reception that can and do influence the ways that religious institutions and lay authors have attempted to captivate new audiences. Drawing on Tradition will appeal to both the dilettante and the specialist: Fans and self-professed otaku will find an engaging academic perspective on often overlooked facets of the media and culture of manga and anime, while scholars and students of religion will discover a fresh approach to the complicated relationships between religion and visual media, religion and quotidian practice, and the putative differences between "traditional" and "new" religions.