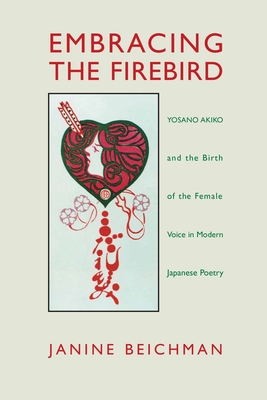 By Janine Beichman
$26.00
Not On Our Shelves - Available to Order

How did a girl from the provinces, meant to do nothing more than run the family store, become a bold and daring poet whose life and work helped change the idea of love in modern Japan? Embracing the Firebird is the first book-length study in English of the early life and work of Yosano Akiko (1879-1942), the most famous post-classical woman poet of Japan. It follows Akiko, who was born into a merchant family in the port city of Sakai near Osaka, from earliest childhood to her twenties, charting the slow process of development before the seemingly sudden metamorphosis.

Akiko's later poetry has now begun to win long-overdue recognition, but in terms of literary history the impact of Midaregami (Tangled Hair, 1901), her first book, still overshadows everything else she wrote, for it brought individualism to traditional tanka poetry with a tempestuous force and passion found in no other work of the period. Embracing the Firebird traces Akiko's emotional and artistic development up to the publication of this seminal work, which became a classic of modern Japanese poetry and marked the starting point of Akiko's forty-year-long career as a writer. It then examines Tangled Hair itself, the characteristics that make it a unified work of art, and its originality. The study throughout includes Janine Beichman's elegant translations of poems by Yosano Akiko (both those included in Tangled Hair and those not), as well as poems by contemporaries such as Yosano Tekkan, Yamakawa Tomiko, and others.