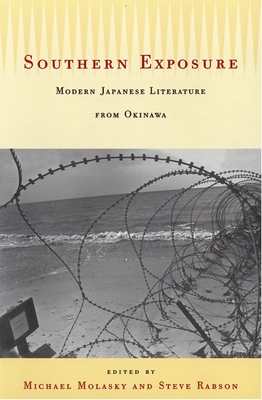 By Michael Molasky (Editor), Steve Rabson (Editor)
$30.00
Not On Our Shelves - Available to Order

Southern Exposure is the first anthology of Okinawan literature to appear in English translation, and it appears at a propitious time. Although Okinawa Prefecture comprises only one percent of Japan's population, its writers have been winning a disproportionate number of literary awards in recent years--including the prestigious Akutagawa Prize for fiction, which was awarded to Matayoshi Eiki in 1996 and to Medoruma Shun in 1997. Both Matayoshi and Medoruma are represented in this anthology, which includes a wide range of fiction as well as a sampling of poetry from the 1920s to the present day.

Modern Okinawa has been forged by a history of conquest and occupation by mainland Japan and the United States. Its sense of dual subjugation and the propensity of its writers to confront their own complicity with Japanese militarism imbues Okinawa's literary tradition with insightful perspectives on a wide range of issues. But this tradition is as deeply rooted in the region's lush semitropical landscape as in the forces of history. As this anthology demonstrates, Okinawan writers often suffuse their works with a lyricism and humor that disarms readers while bringing them face to face with the region's richly ambiguous legacy.