I Am Hermes!: Mischief-Making Messenger of the Gods (Paperback) 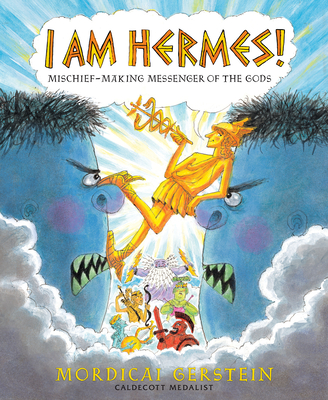 At birth, Hermes, son of Zeus and the Nymph Maia, says his first word: "Gimme!" In this brilliant, hilarious graphic novel about the mischievous, fun-loving messenger of the gods, Caldecott Medal winner Mordicai Gerstein, transports classical mythology to the 21st century.


"The world!" the newly born Hermes says. "It's even better than I expected! I love it! I want it all!"

This book is filled with joy, exuberance, and humor. On his first day of life, Hermes manages to trick a turtle into surrendering its shell and a ram into surrendering its horns, thereby inventing the lyre, music, and song! He also manages to steal his brother Apollo's precious cows, but later redeems himself by outwitting the giant brothers Otus and Ephialtes, who have kidnapped Mars.

These adventures and more, all derived from classical mythology, are told with great humor as well as a twenty-first century sensibility by the colossally talented Mordicai Gerstein.

The art in this graphic novel is truly spectacular, with 250 illustrations, executed by a master artist and filled with unique humor.

A Bank Street Best Book of the Year

Mordicai Gerstein is the author and illustrator of The Man Who Walked Between the Towers, winner of the Caldecott Medal. Four of his books have been named New York Times Best Illustrated Books of the Year. As a child, Gerstein was inspired by reproductions of fine art that his mother cut out of Life magazine and by children's books from the library: "I looked at Rembrandt and Superman, Matisse and Bugs Bunny, and began to make my own pictures." After attending Chouinard Art Institute in Los Angeles, he was hired by an animated cartoon studio where he designed characters and thought up ideas for TV commercials. Gerstein lives in Westhampton, Massachusetts.

★ "Oh, that Hermes: We always knew he was mischievous. . . . A ticklishly madcap quality is I Am Hermes!'s calling card . . . This winning comics-style look at Hermes, messenger of the gods, capitalizes on the humorous aspect of his troublemaking."—Shelf Awareness, Starred Review

★ "These are bright,noisy, fast-moving stories, and here (as elsewhere) Gerstein proves himself a genius of the comics form, especially of the speech balloon, as he creates layered conversations, rich with interior monologue, gossip, and prevarication."—The Horn Book, Starred Review

"Bursting with self-confidence, golden from helmet to winged sandals, and, on the cover at least, sprayed with sparkles, Hermes literally outshines a multihued, caricatured supporting cast of gods, demigods, mortals, and monsters parading through the loosely drawn sequential panels. . . .  A highflying mythological memoir alight with joie de vivre."—Kirkus Reviews


"The sequential artwork sparkles with energy and color, and Gerstein excels at capturing the expressions of the gods, from the grouchy Zeus to the odd, misshapen, many-eyed servant god Argus. In this raucous graphic novel fun fest, any educational value is purely coincidental."—Publishers Weekly

"Gerstein infuses these stories with ample humor, largely fueled by Hermes’ outsized ego and a permissive attitude about his mischievousness. Sketchy, colorful, naive-style illustrations play up the humor with exaggerated facial expressions and slapstick antics go with cartoonish dialogue, which are all right at home in the large format comics panel layouts."—Booklist

"Vivid line and watercolor cartooning, chapter breaks, and a thoughtful balance between narration boxes and speech bubbles make this an easy sell for kids getting up to speed on longer comic books."—The Bulletin of the Center for Children's Books