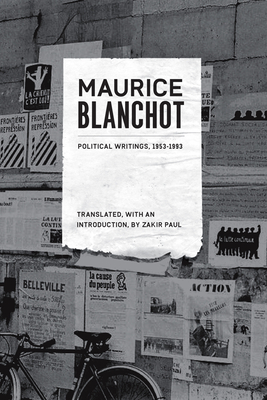 By Maurice Blanchot, Zakir Paul (Translator), Kevin Hart (Foreword by)
$95.00
Not On Our Shelves - Available to Order

Maurice Blanchot is a towering yet enigmatic figure in twentieth-century French thought. A lifelong friend of Levinas, he had a major influence on Foucault, Derrida, Nancy, and many others. Both his fiction and his criticism played a determining role in how postwar French philosophy was written, especially in its intense concern with the question of writing as such. Never an academic, he published most of his critical work in periodicals and led a highly private life. Yet his writing included an often underestimated public and political dimension.

This posthumously published volume collects his political writings from 1953 to 1993, from the French-Algerian War and the mass movements of May 1968 to postwar debates about the Shoah and beyond. A large number of the essays, letters, and fragments it contains were written anonymously and signed collectively, often in response to current events. The extensive editorial work done for the original French edition makes a major contribution to our understanding of Blanchot's work. The political stances Blanchot adopts are always complicated by the possibility that political thought remains forever to be discovered. He reminds us throughout his writings both how facile and how hard it is to refuse established forms of authority. The topics he addresses range from the right to insubordination in the French-Algerian War to the construction of the Berlin Wall and repression in Eastern Europe; from the mass movements of 1968 to personal responses to revelations about Heidegger, Levinas, and Robert Antelme, among others. When read together, these pieces form a testament to what political writing could be: not merely writing about the political or politicizing the written word, but unalterably transforming the singular authority of the writer and his signature. Cet ouvrage, publi dans le cadre d'un programme d'aide la publication b n ficie du soutien financier du minist re des Affaires trang's et du Service culturel de l'ambassade de France aux Etats-Unis, ainsi que de l'appui de FACE (French American Cultural Exchange).
This work, published as part of a program providing publication assistance, received financial support from the Cultural Services of the French Embassy in the United States and FACE (French American Cultural Exchange).

Maurice Blanchot (Author) Maurice Blanchot (1907-2003)--writer, critic, and journalist--was one of the most important voices in twentieth-century literature and thought. His books include Thomas the Obscure, The Instant of my Death, The Writing of the Disaster, and The Unavowable Community. Kevin Hart (Foreword By) Kevin Hart is Chairman and Edwin B. Kyle Professor of Christian Studies in the Department of Religious Studies at the University of Virginia. He also holds courtesy professorships in the Departments of English and French. In addition, he is Eric D'Arcy Professor of Philosophy at the Australian Catholic University. Among his recent scholarly books are Jean- Luc Marion: The Essential Writings (2012), Clandestine Encounters: Philosophy in the Narratives of Maurice Blanchot (2010), and The Exorbitant: Emmanuel Levinas between Jews and Christians (2010). His collections of poetry are Flame Tree: Selected Poems (2002), Young Rain (2008), and Morning Knowledge (2011). Zakir Paul (Translator) ZAKIR PAUL is a Ph.D. candidate in the Department of Comparative Literature at Princeton University.