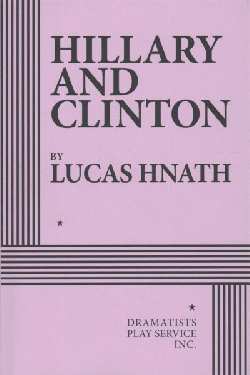 By Lucas Hnath
Unavailable, our apologies.
Sorry, We Can Not Obtain this Book at This Time

In an alternate universe light-years away from our own is a planet called Earth. It looks a lot like our Earth, except it’s slightly different. And living on this other Earth is a woman named Hillary. Hillary is trying to become the president of a country called the United States of America. It’s 2008 and she’s campaigning in a state called Iowa. She’s not doing very well in the polls. She needs more money to keep the campaign going, so she calls her husband for help. He offers her a deal, a tough deal, but when she gets his help, she gets more than she bargained for. You may think you know where this story is going, but you don’t. After all, the play takes place in an alternate universe where anything can happen.

“…HILLARY AND CLINTON is an audacious, whip-smart, highly entertaining piece of writing, all the more valuable for its appearance in the middle of another primary battle, albeit in an America changed for the good…[the play] also has a political immediacy generally lacking in the theater, where plays get locked and set much too far in advance, and where some deep diving into the ideology or emotion of the moment thus becomes all too rare.” —Chicago Tribune.

“Mr. Hnath’s play is a Machiavellian meditation on the sacrifices politicians will make to reach office.” —The Economist.