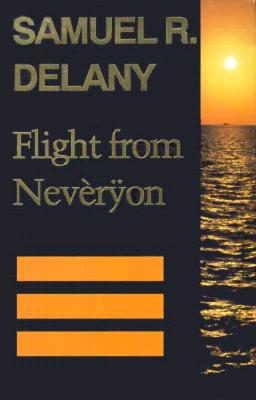 A novel of myth and literacy about a long-ago land on the brink of civilization. Vol 3

In his four-volume series Return to Nev rÿon, Hugo and Nebula award-winner Samuel R. Delany appropriated the conceits of sword-and-sorcery fantasy to explore his characteristic themes of language, power, gender, and the nature of civilization. Wesleyan University Press has reissued the long-unavailable Nev rÿonvolumes in trade paperback.

The eleven stories, novellas, and novels in Return to Nev rÿon's four volumes chronicle a long-ago land on civilization's brink, perhaps in Asia or Africa, or even on the Mediterranean. Taken slave in childhood, Gorgik gains his freedom, leads a slave revolt, and becomes a minister of state, finally abolishing slavery. Ironically, however, he is sexually aroused by the iron slave collars of servitude. Does this contaminate his mission -- or intensify it? Presumably elaborated from an ancient text of unknown geographical origin, the stories are sunk in translators' and commentators' introductions and appendices, forming a richly comic frame.

Samuel R. Delany's many prizes include the Hugo Award, the Nebula Award, and the William Whitehead Memorial Award for a lifetime's contribution to gay and lesbian literature. Wesleyan has published both his fiction and nonfiction, including Atlantis: three tales (1995), Silent Interviews: On Language, Race, Sex, Science Fiction, and Some Comics (1994), Longer Views: Extended Essays (1996), and Shorter Views: Queer Thoughts & the Politics of the Paraliterary. The press has also reissued his classic science fiction novels Dhalgren (1996), Trouble on Triton (1996, originally published as Triton), and The Einstein Intersection (1998).