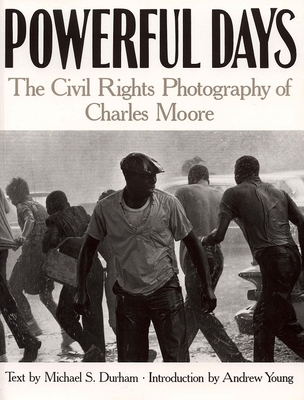 There are few Americans who would not recognize Charles Moore's most famous photographs. His images of the civil rights movement have become, and remain today, internationally known icons-vivid, searing portraits of pivotal moments in the struggle for racial equality in the American South.

This chronological collection of Moore's most compelling and dramatic images, taken as the movement progressed through Alabama, Mississippi, Tennessee, and Georgia, highlights activity from 1958 to 1965. Included are the iconic scenes of black protestors huddled in a doorway to escape the crippling blasts of fire hoses in Birmingham; a white bigot swinging a baseball bat seconds before cracking it on the head of a black woman during the desegregation of the Capitol Cafeteria in Montgomery; a young and stunned Dr. Martin Luther King Jr. pinned to the counter of a police precinct, his arm twisted behind his back; the devastating aftermath of "Bloody Sunday" on the Edmund Pettus Bridge in Selma; and Bull Connor's police dogs tearing mercilessly at the legs of a protestor in downtown Birmingham. Celebrity protestors-comedian Dick Gregory, poet Galway Kinnell, singers Joan Baez, Mary Travers, Pete Seeger, and Harry Bellafonte, actor Pernell Roberts, and writer James Baldwin-are featured alongside the many nameless but committed participants and the recognized major leaders of the movement.

Powerful Days was first published in hardcover in 1991. This new paperback edition will make these famous images, so etched in the memory of those who lived through the social changes of the 1960s, available again to enlighten a younger generation eager to know more about the national struggle that overthrew Jim Crow.

Most of Charles Moore’s civil rights photography originally appeared in the weeklyLife magazine, for which he freelanced from 1962 to 1972. In 1989, Moore, an Alabama native, received the first Kodak Crystal Eagle Award for Impact Photojournalism in recognition of his coverage of the civil rights struggle.
Michael S. Durham was a Life reporter and editor from 1961 to 1972. He is the former editor of Americana magazine and author of two volumes of The Smithsonian Guide to Historic America. Andrew Young worked as a top aide to Martin Luther King Jr. during the 1960s. He has served two terms in the U.S. Congress, was U.S. ambassador to the U.N., and was mayor of Atlanta from 1981 to 1989.

“[This book] contains many images that will be wrenchingly familiar to those who lived through this proud moral turning point in American history.”
—New York Times Book Review


“Powerful Days is powerful stuff. The freedom marchers look as heroic as Iwo Jima Marines fighting their way up a mountain-which is just what they had to do.”
—Newsweek

“Every once in a while we receive a well-documented treasure of American history. This collection is such a treasure. . . . [Moore’s] black-and-white photos of that era are classics of photojournalism, and as Powerful Days documents, those classics have lost none of their force and energy.”
—Southern Living