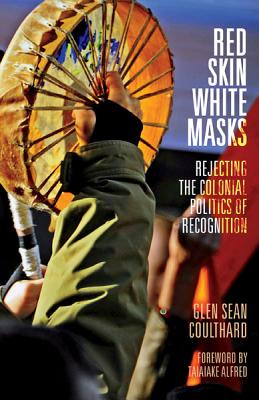 Coulthard vitally conveys a Marxian problematic of combined and uneven development to a program of indigenous cultural resurgence and land-based knowledge. Further, as the title would suggest, the argument extends Fanon's remarks on Hegel (namely, that relationships of outright domination encompass and preclude co-recognition) to powerfully impugn the symbolism of the neocolonial settler state.

Over the past forty years, recognition has become the dominant mode of negotiation and decolonization between the nation-state and Indigenous nations in North America. The term “recognition” shapes debates over Indigenous cultural distinctiveness, Indigenous rights to land and self-government, and Indigenous peoples’ right to benefit from the development of their lands and resources.

In a work of critically engaged political theory, Glen Sean Coulthard challenges recognition as a method of organizing difference and identity in liberal politics, questioning the assumption that contemporary difference and past histories of destructive colonialism between the state and Indigenous peoples can be reconciled through a process of acknowledgment. Beyond this, Coulthard examines an alternative politics—one that seeks to revalue, reconstruct, and redeploy Indigenous cultural practices based on self-recognition rather than on seeking appreciation from the very agents of colonialism.

Coulthard demonstrates how a “place-based” modification of Karl Marx’s theory of “primitive accumulation” throws light on Indigenous–state relations in settler-colonial contexts and how Frantz Fanon’s critique of colonial recognition shows that this relationship reproduces itself over time. This framework strengthens his exploration of the ways that the politics of recognition has come to serve the interests of settler-colonial power.

In addressing the core tenets of Indigenous resistance movements, like Red Power and Idle No More, Coulthard offers fresh insights into the politics of active decolonization.

Glen Sean Coulthard (Yellowknives Dene) is assistant professor in the First Nations Studies Program and the Department of Political Science at the University of British Columbia.

"While Red Skin, White Masks focuses on indigenous experiences in Canada, it is immediately applicable to understanding the false promise of recognition, liberal pluralism, and reconciliation at the heart of colonial relationships between indigenous peoples and nation-states elsewhere. Glen Sean Coulthard is able to bring a remarkably distinctive and provocative look at issues of power and opposition relevant to anyone concerned with what constitutes and perpetuates imperialist state formations and what indigenous alternatives offer in regards to freedom."—Joanne Barker, San Francisco State University

"Red Skin, White Masks offers a sustained, well-informed, and sophisticated critique of the recognition paradigm as an effective theoretical frame for projects of decolonization."—Paul Patton, University of New South Wales

"Red Skin, White Masks is not only a landmark contribution to political theory, it is also a call to action."—Briarpatch Magazine

"A must read."—Contemporary Political Theory

"Highly recommended for those interested in understanding Indigenous movements and social movements in particular."—CHOICE

"Coulthard proposes a new narrative of Canadian history in which non-Aboriginals will have to recognize that our society is fundamentally shaped by Aboriginal culture and come to terms with a much greater level of power sharing than we so far have contemplated."—GEIST

"A timely book, resonant with the frustration of Indigenous communities who have pursued formal political negotiations with the Canadian settler colonial state for decades without meaningful change."—Antipode

"Coulthard’s fundamental insight is that we urgently need a new theory and practice of settler decolonization."—Native American and Indigenous Studies Journal

"The rich ideas that are shared throughout the book serve to raise the consciousness of not only non-Aboriginal readers, but those who are First Nations and committed to the continued examinations of the critical thresholds of colonial practices."—The Canadian Journal of Native Studies

"U.S. historians should heed the example set by Coulthard so that readers can better understand the self-determination activities and efforts of native nations today."—Journal of American History

"A brilliant contribution to the fields of political theory and critical Indigenous studies, offering remarkable explanatory power for state-Indigenous relations in Canada today."—Stefan Andreas Kipfer in AAG Review of Books

"Red Skin, White Masks provides a much needed analysis of Indigenous struggles articulated through a politics fueled not by harmony and pacification, but by grounded theory, which wraps us in an affective decolonial terrain that fosters a commitment to mobilize ourselves."—Sarah Hunt in AAG Review of Books

"Red Skin, White Masks deserves to be widely read, in political philosophy and by all those concerned with furthering justice in an unequal, unjust world."—Theoria: A Journal of Social and Political Theory

"His critical discussions of the theories of recognition, multiculturalism and identity politics are fresh and engaging."—Political Studies Review